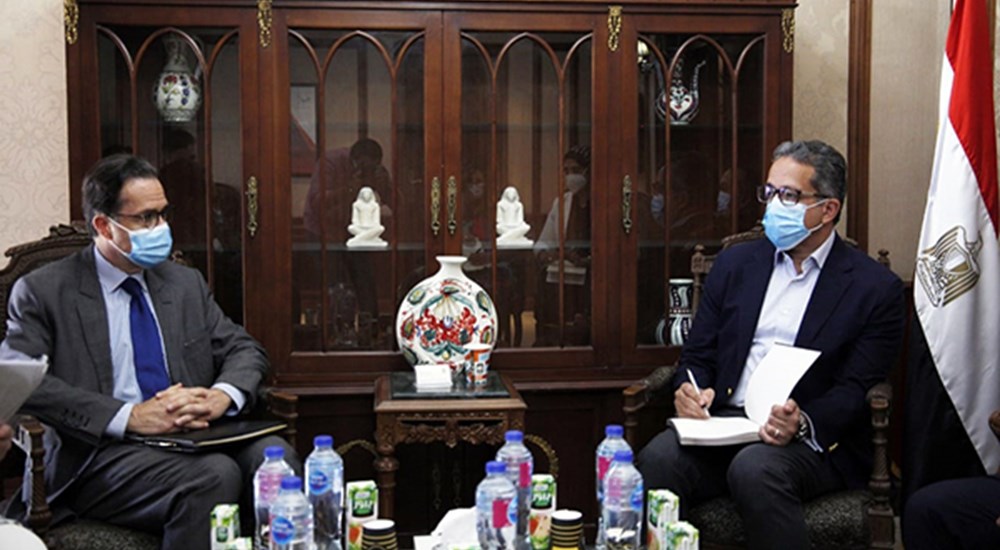 Today, Dr. Khaled El-Anany, Minister of Tourism and Antiquities, received, at Ministry’s headquarters in Abbasiya, Ambassador Stéphane ROMATET, Ambassador of State of France in Cairo, Mr. Jamel Oubechou, French Cultural Counselor, and Mrs. Yannick LINTZ, Director of Islamic Art Department at Louvre Museum, in presence of Dr. Mostafa Waziri, Secretary-General of Supreme Council of Antiquities, and Prof. Moamen Othman, Head of the Museums Sector at Ministry, and Dr. Mamdouh Othman, Director of Museum of Islamic Art.
The minister started meeting by emphasizing depth of Egyptian-French relations, as two countries have extensive historical and civilizational relations and fruitful cooperation in many fields, including tourism and antiquities.
The meeting touched on discussing number of important issues that would enhance cooperation between two countries in field of tourism and antiquities and push tourist movement coming to Egypt from France, especially with gradual opening of movement of tourism and travel globally and continuation of procedures for vaccinating citizens with anti-Corona virus vaccines, as Egypt is one of favorite tourist destinations of French tourist because of its unique tourist attractions such as natural landscapes, beautiful beaches and unique monuments.

During meeting, they also discussed possibility of organizing a number of cultural celebrations between two countries during 2022, including celebration of 200th anniversary of deciphering of Rosetta Stone, and establishment of an archaeological exhibition in cooperation between the Museum of Islamic Art in Cairo and Louvre Museum in Paris to display number of artifacts from Islamic times from collections of each From two museums, in addition to discussing possibility of exchanging experiences and mechanisms for providing technical support within Ministry’s agencies in field of museums and archaeological sites, in addition to cooperation agreements to train archaeologists, restorers and curators of various museums.