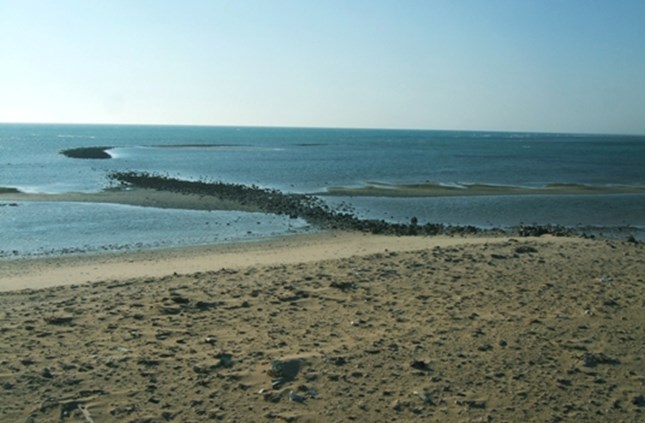 The oldest submerged Harbor which located in red sea governorate dated to 2600 B.C - its construction approximately takes a form of LShape. The sea port consists of the remains of water installations in the form of the Latin letter L with a slightly spherical angle. Today, part of it appears on a small rocky head, then extends eastward to about 160 m and then extends irregularly to the south-east for about 130 m. The width of this building is between 8 m and 14 m and is deposited in water that does not exceed the depth - currently - two meters. It is likely that this building was constructed to serve as a barrier to the northern waves and currents to provide a large water area where ships can dock and depart safely. The water area occupied by the inland basin of the old port is estimated to be at least 5.67 ha. The site's function as a seaport is confirmed by the finding of 21 limestone anchors dating back to the 4th Dynasty, about 120 meters from the present beach and about 11 meters south of the wave barrier. There is no doubt that the discovery of the port, which dates back to the era of King Khufu, the most famous of the kings of the fourth family (about 2600 BC) in the location of the valley of the shelf is one of the most important scientific events in the modern era; because it contains the oldest facilities of the port known industrial so far in the world, This port is that the ancient Egyptians had experienced the establishment of sea ports since the fourth family at least, and formed a network between the Red Sea coast and the Sinai Peninsula.