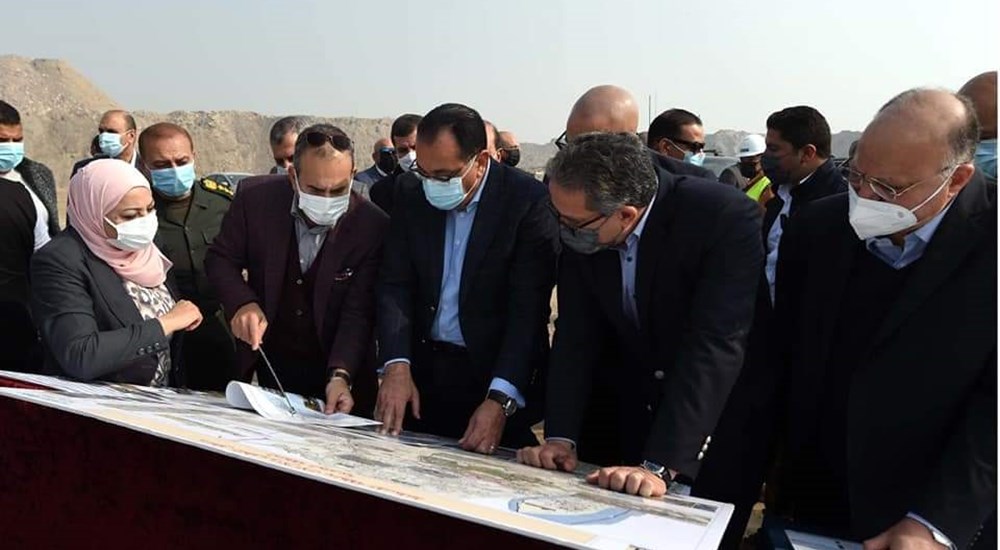 Madbouly: Evacuating Ezbet Abu Qarn and settling its people in a civilized project is a historic achievement... and a dream that has become a reality

Prime Minister Dr. Mostafa Madbouly continued his tour today of development projects in Cairo, where he inspected the implementation site of the Fustat Gardens project, to follow up on the removals situation there, and the progress of development work.
The Prime Minister listened to an explanation in which it was pointed out that the implementation of the Fustat Gardens project is carried out according to a vision that includes the removal of many unplanned slum areas, to implement an integrated civil project that achieves tourist, recreational and educational purposes in the heart of the capital and in the center of its historical and archaeological areas with a distinctive civilized character.
Madbouly and his companions inspected Ezbet Abu Qarn, which has been completely vacated from random buildings, on an area of ​​about 28 acres, in preparation for the start of development work in the area within the Fustat Gardens development project.
He listened to an explanation in which it was noted that the 4700 families of the estate were evacuated from it, who were completely moved, and re-housed in alternative housing units equipped with furniture in the Ma'an Civilized Project, in the City of Peace.
The Prime Minister stressed that what was achieved in evacuating Ezbet Abu Qarn and settling its people in a civilized project is a historic achievement, and a dream that was finally achieved, and became a reality, after decades of attempts to evacuate this area in vain, to enter this area immediately within the implementation plan of the Fustat Urban Gardens project. , extending thanks to the Cairo governorate, governorate officials, the head of the neighborhood and other officials for the effort they made to realize this dream.
The Prime Minister and his entourage also went to the vicinity of the Amr Ibn Al-Aas Mosque, to follow up on the general plan of the project to develop this area, within the Fustat Gardens project, which includes the development of the mosque and the courtyard attached to it. tiered.
Madbouly listened to an explanation in which it was indicated that the project to develop the Amr Ibn Al-Aas Mosque is being carried out on an area of ​​12,000 square meters, and will include 4 tiered planting walls, 3 fountains, 12 planting basins, 174 palm basins, and the development of gates. The project is also witnessing the implementation of a garden The reception, the orchard walk, the creative center for children, a multi-use building, the children’s interaction area with pets, the memorial garden, the botanical garden, the iconic sculpture, the festive square, parking lots, garden entrances, and some other areas, as well as the development of the market to include heritage crafts, most notably works Glass, ceramics, wax, spinning and weaving, with the development of the cemetery area, the Fustat excavations site, the Fustat garden recreational center, the natural rock amphitheater, the Martyrs' Square, the castle yard, the garden yard, the valley walkway, the performance platform, the community garden, and the parking lot.
The Prime Minister directed the speedy completion of the works being carried out to completely restore the Amr Ibn Al-Aas Mosque, as it will be considered the most prominent element of the development of this area, with its historical, religious and heritage importance.