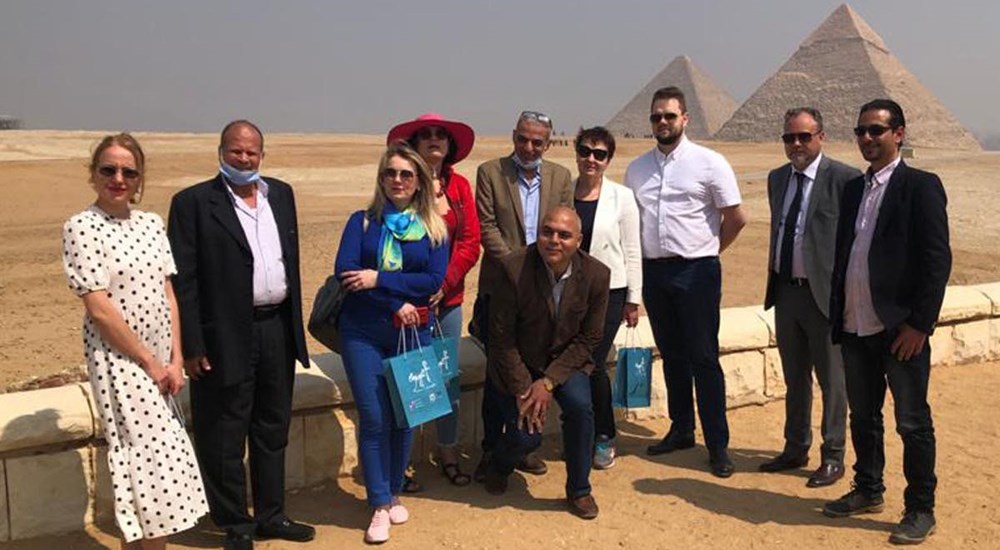 The Ministry of Tourism and Antiquities, represented by the Egyptian Tourism Promotion Board, organized for the delegation from Belarus to Egypt a program to discuss ways to enhance tourism cooperation between the two countries, Eng. Ahmed Youssef, CEO of the Egyptian Tourism Promotion Board, accompanied the delegation on a visit to Sharm El-Sheikh.

During the visit, members of the delegation oversaw the precautionary measures and health safety controls that are applied in hotels in Sharm El-Sheikh. They also visited the Sharm El-Sheikh International Hospital and checked out the laboratory for conducting PCR tests.

Eng. Ahmed Youssef pointed out that this visit comes in light of the efforts made by the ministry to push the tourist movement coming to Egypt, and it is part of the promotional activities plan that the board is keen to organize to further promote the Egyptian tourist destinations and transmit messages of reassurance about what the Ministry of Tourism and Antiquities and the Egyptian government has taken in the form of Precautionary measures to ensure the health and safety of citizens, tourists and workers in the tourism sector. In addition to discussing ways to push more tourist movement coming to Egypt, especially in light of the presence of a real desire on the Belarusian side to increase the Belarusian tourist flow to Egypt due to the leading position of the Egyptian tourist destination.

During the visit, members of the Belarusian delegation praised the precautionary measures applied by the Egyptian government in tourist and hotel facilities, museums and archaeological sites, as well as the health safety standards that are followed inside the airport, arrival and departure halls, and social distancing measures.

It is worth noting that the Belarusian delegation are on an official visit to Egypt as they held several official meetings with the Egyptian government in Cairo and organized various workshops to discuss ways to revitalize tourism between the two countries.