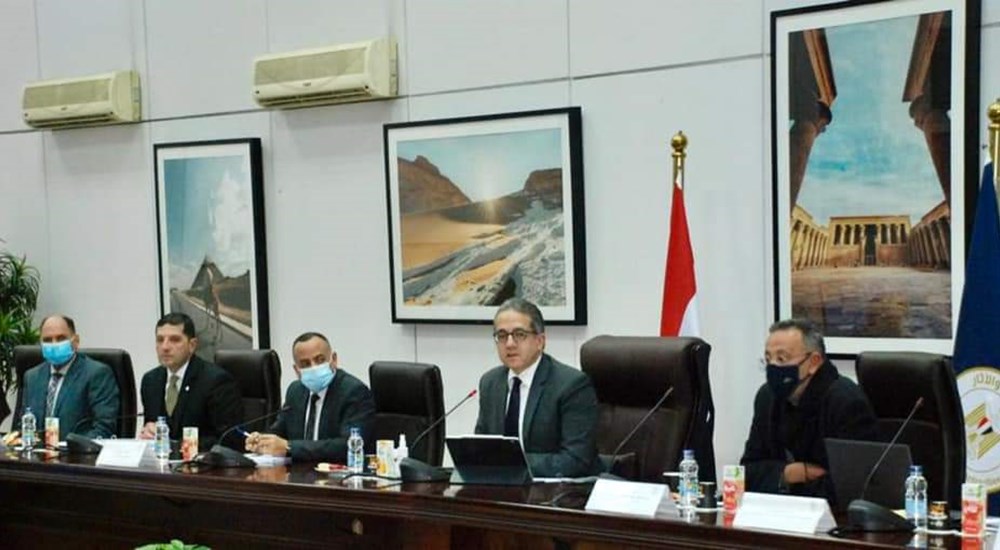 Transferring more than 55,500 artifacts to the Grand Egyptian Museum

Khaled El-Anany, Minister of Tourism and Antiquities, chaired the meeting of the Board of Directors of the Grand Egyptian Museum Authority, at the ministry’s headquarters in Zamalek.

The meeting was initiated by the representatives and officials of the Hassan Allam Alliance, the winner of providing and operating visitor services at the Grand Egyptian Museum, giving a presentation during which they reviewed the work plan for operating services in the museum and presented the initial plan for operation.

Major General Atef Moftah, the general supervisor of the Grand Egyptian Museum project and the surrounding area, briefed the council members about the results of the completion rates of the museum project. And from the interior finishes by 99%, and the volume of achievement in implementing electromechanical systems reached 96%, and in implementing ICT communications and insurance systems to 90%.

Regarding the development work of the surrounding area, Major General Atef Moftah explained that the external yards and plants have been completed by 98%, and the volume of completion in the surrounding external roads has reached 92%, and the front of the pyramids has reached more than 99%. This is in addition to the completion of 100% of the concrete and metal structure of the Khufu Boat Museum, and the necessary finishing works are underway for the building. He also reviewed the architectural solution to increase the parking capacity of vehicles to reach more than 2,000 parking spaces, an increase from the current availability of 1,300 vehicles.

For his part, Dr. Al-Tayeb Abbas, Assistant Minister of Tourism and Antiquities for Archaeological Affairs at the Grand Egyptian Museum, reviewed the status of the progress of works in the archaeological work at the Museum; Where he explained that the size of the achievement in the entrance hall and the great staircase reached more than 99%, and the finishes of the King Tutankhamun hall were completed by more than 99%, in addition to that the artifacts were placed in 85 of the 107 display windows, which included Install more than 4,500 artifacts of the treasures of the young king.

The Assistant Minister for Archaeological Affairs at the Grand Egyptian Museum added that 96% of the finishes for the main exhibition halls have been completed, and more than 55,500 artifacts have so far been transferred to the museum.