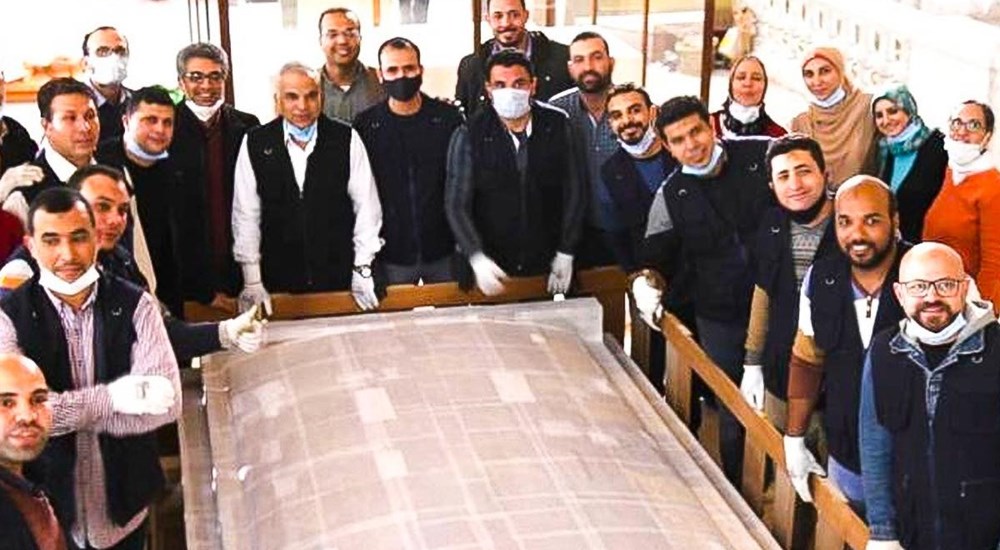 The Grand Egyptian Museum received the fourth shrine of King Tutankhamun from the Egyptian Museum in Tahrir, which will be part of the display scenario of the halls of the treasures of the Golden King.

Major General Atef Moftah, General Supervisor of the Grand Egyptian Museum project and the surrounding area, explained that the transfer was carried out amid security measures by the Tourism and Antiquities Police and under the supervision of restorers and museum curators. He indicated that although this shrine is the smallest of King Tutankhamun's shrines, it is considered one of the largest artifacts that have been transferred from the King’s treasures so far to the museum.

Dr. Al-Tayeb Abbas, Assistant Minister of Tourism and Antiquities for Archaeological Affairs at the Grand Egyptian Museum, said that this shrine will be subject to restoration work inside the museum. He added that it is made of gilded wood.

Dr. Al Tayeb Abbas said that the rest of the three shrines will be moved consecutively to be displayed with the rest of the king’s treasures in Tutankhamun’s hall on an area of ​​7,500 squared meters.

Mr. Moamen Othman, Head of the Museums Sector at the Supreme Council of Antiquities, said that before the transfer, the shrine was examined and a detailed report was prepared to document its preservation status. He added that the restoration team carried out scientific and archaeological documentation of it and took all necessary scientific measures for restoration, maintenance. They strengthened certain parts to ensure the safety of the shrine during transportation.
Mr. Moamen Othman added that the team covered the shrine with Japanese chu paper and the appropriate stiffening materials to ensure its complete safety during the transportation process.

Dr. Issa Zidan, Director General of Executive Affairs for Restoration and Transfer of Antiquities at the Grand Egyptian Museum, said that the transfer of the shrine was carried out according to international scientific standards. He explained that the treasuers were dismantled into five parts with the same technique that the ancient Egyptian used, and then each side was individually wrapped. And inner and another outer boxes were added using acid-free materials.

Dr. Issa Zidan added that the team from the Grand Egyptian Museum and the Egyptian Museum in Tahrir will reassemble the shrine again, within the next few days, inside its showcases in the halls of the Boy King’s treasures.