The discovery of this tomb stresses the importance of Djedkare’s era, and the end of the 5th Dynasty in general 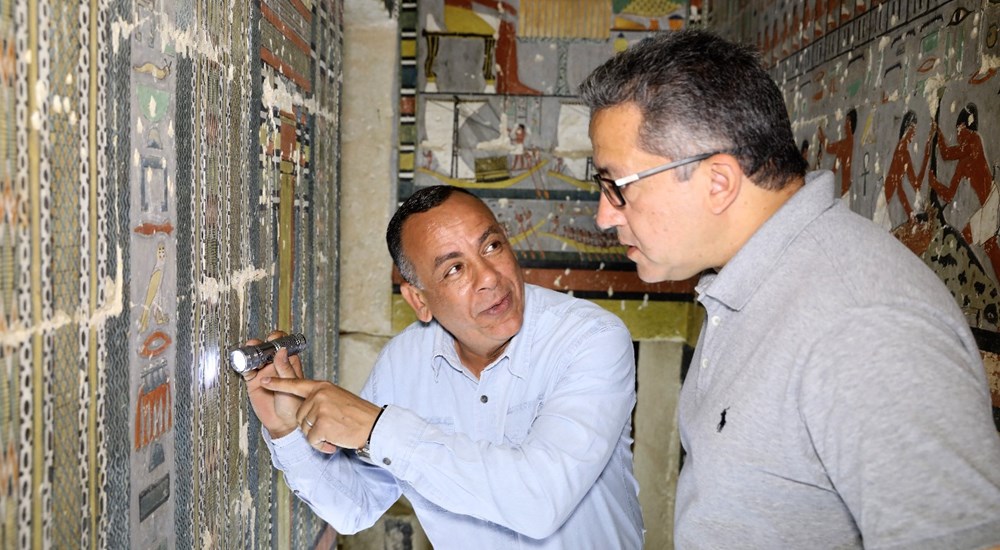 Minister of Antiquities Dr.Khaled El-Enany embarked today in an tour to Saqqara Necropolis along with 52 ambassadors and cultural attaché of foreign, Arabs and African countries to inspect the newly discovered tomb of a dignitary during the reign of king Djedkare named Khuwy.

Renowned Egyptian actress Yosra came especially to Saqqara to enjoy the visit of the newly discovered tomb. SHe was very enthusiastic and described it as thrilling and exciting . Yosra thanked the ministry of antiquities and the minister of antiquities for all the efforts they expected to preserve Egypt’s antiquities and discover all these discoveries

Dr. El-Enany welcomes all the attendees and said that although the tomb was announced early this month all the media insisted to go and visit it live.

He pointed out that it is the fifth time to flock into Saqqara necropolis to attended the announcement of the discoveries of a mummification workshop, wahti tomb, the cats necropolis and the opening of mehu tomb.

He announced that on the 18th of April, the ministry will celebrate the world hero day via the announcement of two new discoveries in Luxor and the restoration of the colossus of Ramses II on display at the first pylon of luxor temple. The ministry will also open all museums and archaeological sites in Egypt for free for Egyptians as well as Africans, Arabs and foreigners who are living in Egypt

The tomb was discovered by an Egyptian archeological expedition under the direction of Dr. Mohamed Megahed at south Saqqara. It is a unique tomb of the dignitary Khuwy who lived at the end of the 5th Dynasty of the Old Kingdom. The tomb was found during the excavation and documentation activities of the area.

The tomb consists of a superstructure with an L-shaped offering chamber, which was once decorated with reliefs. Only the bottom part of this decoration is preserved due to re-use of its white limestone blocks in later times in antiquity.

In the north wall of the tomb the mission found the entrance to a unique substructure, which is for the first time clearly inspired by the design of the substructures of the royal pyramids of the 5th Dynasty. This part of the tomb started with a descending corridor, which leads to a vestibule. An entrance in its southern wall gives access to a decorated antechamber. Its decoration represents the tomb owner sitting in front of the offering table on the south and north walls. Moreover, an offering list was depicted on the east wall and the palace-façade on the west wall.

Through two entrances in the west wall of the antechamber the mission succeeded to enter a second room, which was the burial chamber itself and which had remained undecorated. Dr.Megahed said that It seems that the space of the burial chamber was almost completely filled with a limestone sarcophagus, which was found entirely destroyed by ancient tomb robbers. However, the mission discovered remains of the body of Khuwy, which shows clear traces of mummification.

An entrance in the south wall of the decorated antechamber leads further to a small room used most likely as a storeroom. The mission found this room filled with debris but contained almost no finds.