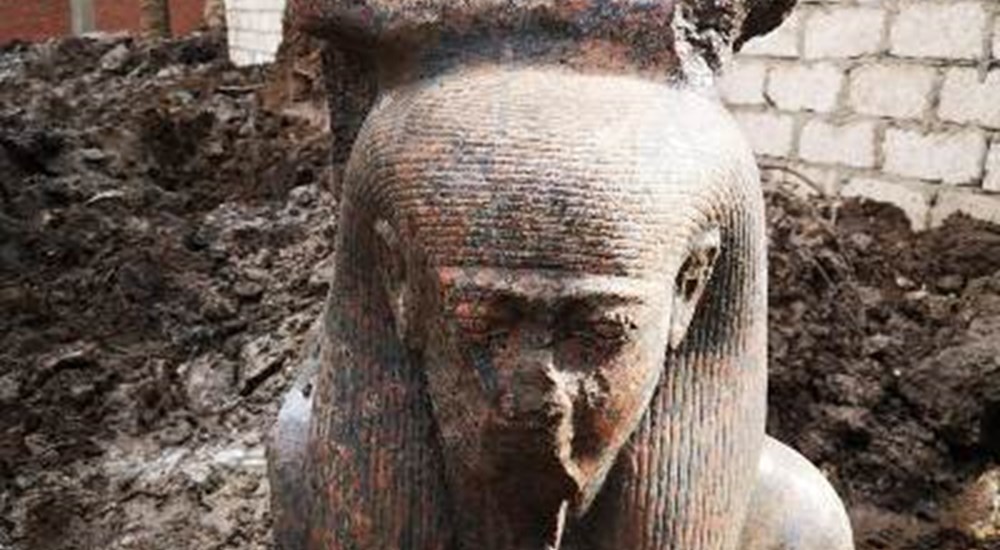 Rescue excavation work started by the Ministry of Antiquities last Wednesday, the 11th of December, unearthed a rare royal ka‑statue of King Ramses II near the temple of the god Ptah in Mit Rahina. Excavation work is being carried out in a plot of land owned by a citizen who was arrested by the Tourism and Antiquities Police in early December, on charges of illegal excavation that led to the discovery of large stone blocks from an ancient structure immersed in groundwater.

According to Dr. Mustafa Waziri, Secretary General of the Supreme Council of Antiquities, the archaeological rescue mission discovered the upper part of a rare pink granite royal ka‑statue of King Ramses II. In ancient Egyptian religion, the ka was a representation of the vitality and spirit of a person. Dr. Waziri stressed the extreme rarity of this discovery, referring to the fact that this statue is the first granite roya­l­­ ka‑statue ever discovered. Thus far, the only known royal ka‑statue was the wooden one of the Thirteenth‑Dynasty king Auibre Hor, which is currently on display in the Egyptian Museum on Tahrir Square.

The discovered part of the statue is 105 cm in height, 55 cm in width, and 45 cm thick. King Ramses II is depicted wearing a wig and the symbol of the ka on his head, which consists of two upraised arms. The statue's back pillar is inscribed with the Horus Name of Ramses II, Ka‑nakht‑mery‑Maat, which means "The Strong Bull, Beloved of Maat".

The statue and the large number of blocks of the ancient structure discovered by the rescue excavations were transported to the open‑air museum in Mit Rahina to undergo the restoration work necessary for their preservation. These pink granite and limestone blocks bearing hieroglyphic inscriptions and the cartouches of King Ramses II depict Ptah, the god of the city of Memphis, and likely formed a part of his main temple in this great city. Also carved on these blocks are depictions of this king participating in the Sed Festival.