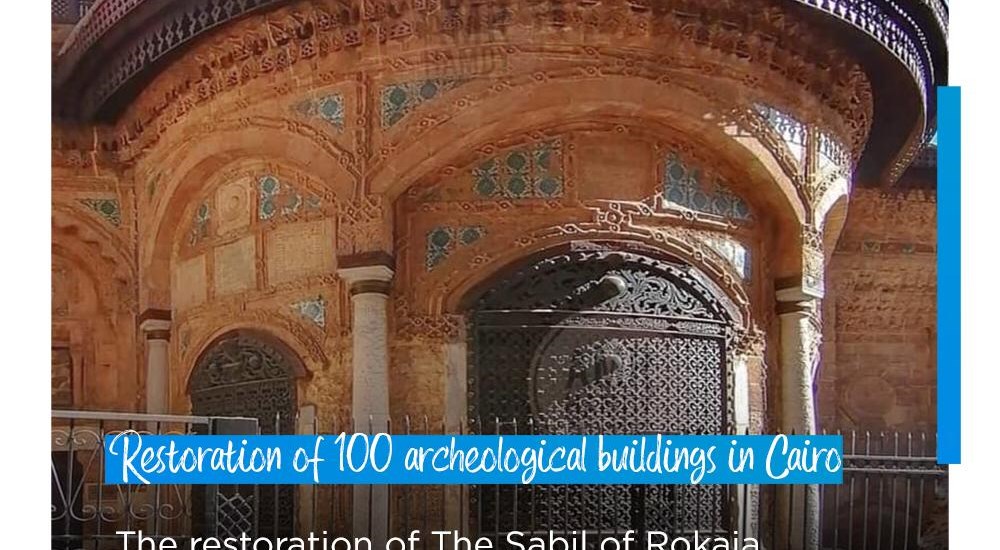 As part of the project launched by the Ministry of Tourism and Antiquities to restore and save 100 archaeological buildings in Historic Cairo, the restoration and development of “Sabil” of Rokaia Dodu on Souk El-Selah Street have been completed, in cooperation with the inspection sector of the antiquities area of Al-Darb Al-Ahmar, and under the supervision of the General Administration of the Historic Cairo Development Project.

Brigadier Engineer, Hisham Samir, Assistant Minister of Tourism and Antiquities for Antiquities and Museums Projects and Supervisor of the Historic Cairo Project, explained that the restoration
was carried out according to the artistic and archaeological old maps and documents of the Sabil, as it included the architectural documentation works, the careful restoration of the Sabil façade and to show the decorated copper windows. This is considered one of the most beautiful of the Ottoman Sabil facades in Cairo.

Brigadier General Hisham Samir added that the internal restoration of the Sabil included restoring the marble floor of the basement, restoring and isolating the ornate wooden ceiling, and the wooden windows and booklets in the Kottab room. It also included upgrading the posterior area for the pathway.

Mahmoud Abdel-Baset, Director General of Historic Cairo, indicated that electricity network is upgraded and a new lighting system from the inside and outside is established.

Rokaia Dodu was built by Badawiya bint Shaheen in the name of her late daughter Rokaia Dodu in 1174 AH, according to what was indicated by many inscriptions on the front of the Sabil. She is the granddaughter of Radwan Ketkhda Al-Galfi. They, however were not allowed to write his name on this facility due to his defeat by the Mamelukes. It follows in its layout the Ottomans architecture with an arched façade, which consists of a rectangular stone in three sides, and the fourth side takes the curved shape, opening the windows of the Sabil, and above it is a Kottab.