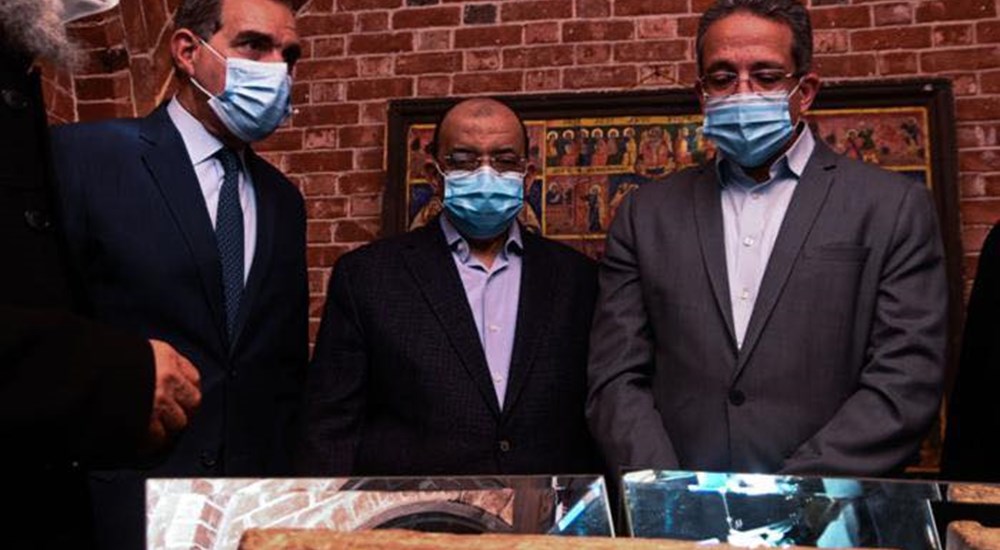 Today, Dr. Khaled El-Enany, Minister of Tourism and Antiquities, Major General Mahmoud Shaarawi, Minister of Local Development, and Major General Gamal Nour El-Din, Governor of Kafr El-Sheikh, inaugurated the second point in the project to develop the path of the Holy Family Journey to Egypt in Kafr El-Sheikh governorate after the completion of its development project. They also visited the Church of the Virgin Mary in Sakha.

This area is the second site in Egypt within the Holy Family Path project to be opened after its development.

This visit comes within a series of openings by the two ministries, which began last January with the opening of development works for the Samanoud site in the Gharbia governorate, as the first point to be developed.

The people of the area joyously received the Ministers of Tourism and Antiquities and Local Development, and the Governor of Kafr El-Sheikh, expressing their happiness over the work done to develop the region.

During the visit, they reviewed the development work that took place. This included providing wooden umbrellas and seats for visitors in the outside yard. They are made of stone and wood in line with the general atmosphere of the area. Labels and identification panels for the place were pilot in place, in addition to implementing a security system, installing electronic gates and surveillance cameras. A modern lighting system to illuminate the area at night and show its beautiful spots was implemented. Parking spots and a walking area for visitors have also been provided.

During the visit, a short documentary film on the path of the Holy Family journey to Egypt was shown.

Dr. Khaled El l-Enany said that the Church of the Virgin Mary in Sakha is a spiritual place where anyone can feel intense spirituality upon her visit and feel the blessing of the Holy Family for her.

He also thanked the Minister of Local Development, Governor of Kafr El-Sheikh and the everyone working on the project for the great effort made. He added that the development projects that are carried out to raise the efficiency of the infrastructure of the points on the Holy Family Journey in Egypt. He indicated that the infrastructure work that took place in that area will help put it on the map of tourism.

According to Coptic historical sources, the Holy Family stayed in Sakha for a period of 7 days, and it contains many important religious monuments, most notably the stone on which the foot of Christ was imprinted as a child, in addition to many manuscripts that were preserved Inside the church.

Major General Mahmoud Shaarawy referred to the importance of the Holy Family Path project from the political, heritage, religious, cultural and tourism aspects for the Egyptian state.

The Minister of Local Development extended his sincere thanks to Major General Gamal Nour El-Din, Governor of Kafr El-Sheikh, and all the fathers, representatives of the Virgin Mary Church of Archeology, generously for their follow-up of all project developments until the completion of a comprehensive and serious development process that took into account all the vocabulary of the historical monument and the surroundings of the track point.

Shaarawi announced that the 8 governorates of Egypt concerned with rehabilitating the route line have completed their work on all 25 points in a system of effort and fruitful cooperation that was coordinated with Dr. Khaled El Enany and fellow colleagues in the Ministries of Tourism and Antiquities and Local Development, pointing out that the 8 governorates have completed all the terms of the pathway development which will help present Egypt and its honorable people to the whole world one of the most important heritage and humanitarian monuments related to all of our peoples, as the laying of the route line has been completed and rehabilitated, and prepared for the visit of local and international tourism programs.

The Minister of Local Development indicated that the work of the Supreme Committee formed for this purpose included the Ministry of Local Development with the participation of the Ministry of Tourism and Antiquities, the General Secretariat of the Council of Ministers and the Tourism Committee in the House of Representatives, and with the cooperation of the Coptic Church and honorable parishes from His Holiness Pope Tawadros II, Pope of Alexandria - and the priests in all the governorates of Egypt covered by the project.

Major General Mahmoud Shaarawi explained that the project is one of the most important heritage, religious and touristic landmarks in Egypt, which will have the greatest impact on developing the local community and promoting popular participation.

Shaarawi added that this project we present to the world confirms Egypt's respect for its history and the heritage represented by the path of the Holy Family, which presents the image of Egypt, as it always is, in its best form, as a model for coexistence with history, culture, civilization, religions and the noble principles that it presents to the whole world.

Major General Gamal Nour El-Din, Governor of Kafr El-Sheikh, said that the development work was carried out for only 3 months, and the path was divided into 4 areas, the first area, the main street and the secondary street leading to the church, so the two streets were converted into a pedestrian path 6 meters wide and a sidewalk which is 2 meters wide on both sides. Also, a set of waiting chairs, as well as interactive maps with tourists, inside a painting that is carefully embellished with materials commensurate with the historical value of the track, and a complete paving of the streets with normal and luminous interlock tiles.

The governor of Kafr El Sheikh added, As for the public garden, it now consists of circular and rectangular wooden pergolas with a distinctive character with corridors made of hard stone, marble, within a frame of carefully designed green areas, to suit the general taste of the region. The area is separated from the surrounding areas by using iron fences, paintings, maps and drawings that show the archaeological value of the path.

The governor said that the tourist bus waiting area, which is a place designated for buses and tourists’s cars, was left, and a street space was left for residents of the surrounding areas to enter their homes, and to relieve the traffic of the tourists’s buses and cars, and the entrances and main streets, so the iron fences and buildings were repainted on both sides of the streets. Leading to the area of the specified path for visitors with the implementation of a set of gates that define the general character of the path and posting guiding signs to clarify the entrances and exits of the path.