Inaugurating the development project of Tel Basta site in Sharkia 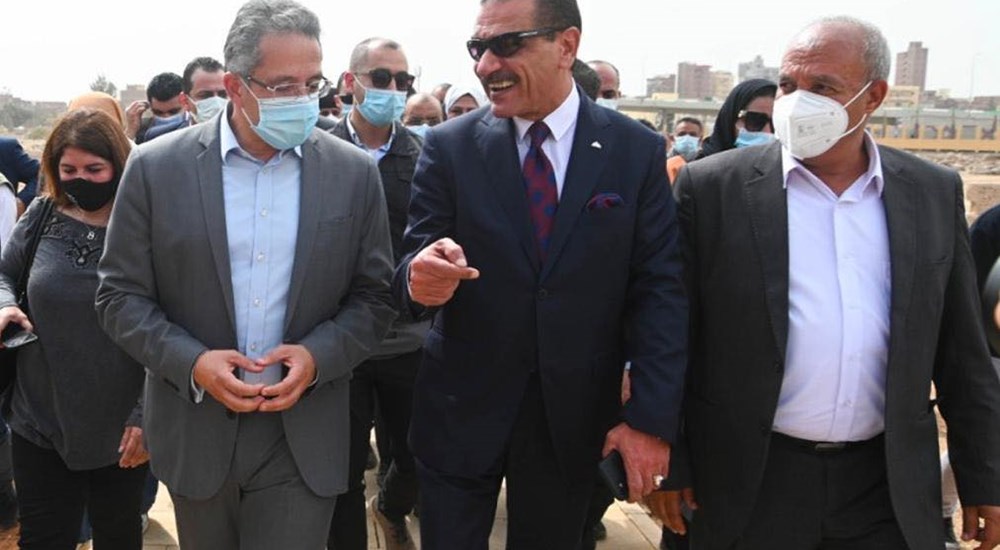 After the inauguration of the project to develop the area surrounding the Church of the Virgin Mary in Sakha, Kafr El-Sheikh Governorate, which is the second point in the path of the Holy Family journey in Egypt, Dr. Khaled El-Enany, Minister of Tourism and Antiquities, and Major General Mahmoud Shaarawi, Minister of Local Development, opened the develop project of Tel Basta site in Sharkia Governorate, one of the eastern points on the path of the Holy Family journey. The Ministers were received by Dr. Mamdouh Ghurab, Governor of Sharkia.

During the visit, Dr. Khaled El Enany said that he is happy that he was in his original homeland. He added that Tal Basta is one of the iconic points on the Holy Family Journey in Egypt. He said that there is a spiritual aspect to this place due to its connection to the path of the Holy Family, which is the first entry point of the Holy Family to Egypt.

He thanked the Minister of Local Development, the Governor of Sharkia, and the staff of the Ministry of Tourism and Antiquities for the effort made in all the development work.

The Minister added that this morning, a project to develop the area surrounding the Church of the Virgin Mary in Sakha in Kafr El-Sheikh Governorate was inaugurated, indicating that 2021 is a special year during which the fruits of what has been done in the path of the Holy Family during the past two years will be reaped, pointing out that it was inaugurated when he was only the Minister of Antiquities , as he inaugurated many archaeological sites on the path after the completion of their restoration, and today he is Minister of Tourism and Antiquities and is keen to pay attention to the touristic part as well as the archaeological part, explaining that in 2021 there will be openings of many sites on the path after the restoration and development of the surrounding area, including the sites in Al-Matariyah, Assiut Governorate and Jabal Al-Tair, Minya and others.

The minister emphasized that Sharkia has touristic and archaeological potential that contribute to placing it on the tourism map.

Mr. Adel Al- Gendi pointed out that the importance of the Tel Basta site in the Sharkia governorate comes because it contains the well site that the Holy Family passed through, which is located in the middle of an archaeological area surrounding the well, pointing out that the opening of the Tel Basta site development project in Sharkia comes within the series of inaugurations that the Ministry is undertaking, which began with the development works for the Samanoud site in Gharbia Governorate, as the first point to be fully rehabilitated.

He explained that a set of indicative panels had been completed for people coming from the route sites in Greater Cairo in the south and another within the city of Zagazig, and indicative signs leading to the track sites in the Delta region and East Port Said, in order to achieve the creation of the complete tourist connection that extends over a length of 3500 km, starting from Rafah in the east, passing through the rest of the holy family path points in the Delta, Greater Cairo, Wadi El Natroun, and reaching central Egypt at Minya and Assiut, with a total of about 25 points, pointing out that all the signs bear the slogan of the Holy Family, which was designed by the Ministry of Tourism and Antiquities in cooperation with the working team.

The Minister of Tourism and Antiquities also inaugurated the Egyptian Heritage Exhibition, where he toured the exhibition, during which he checked out the traditional crafts in the exhibition.

Mrs. Iman Zidan said that this exhibition comes in line of the sustainable development strategy Egypt 2030, to develop innovation and creativity for traditional, heritage and tourism industries, and to support and empower entrepreneurs from craftsmen and medium and small enterprises.

She added that the Ministry of Tourism and Antiquities is working to support and empower the owners of handicrafts and creative industries effectively through a package of measures aimed at supporting and developing the sector. Therefore, the Ministry is organising a series of Egyptian heritage exhibitions that are held in archaeological sites and museums, in addition to local and international events and conferences organized by the Ministry, in line with the Ministry's strategy that aims to improve the type and quality of services at archaeological sites and museums to encourage Egyptian products and craftsmen to revive traditional and heritage industries.

At the end of the visit, the governor gave the Minister of Tourism and Antiquities a souvenir, which is considered to be the Oscar of Sharkia