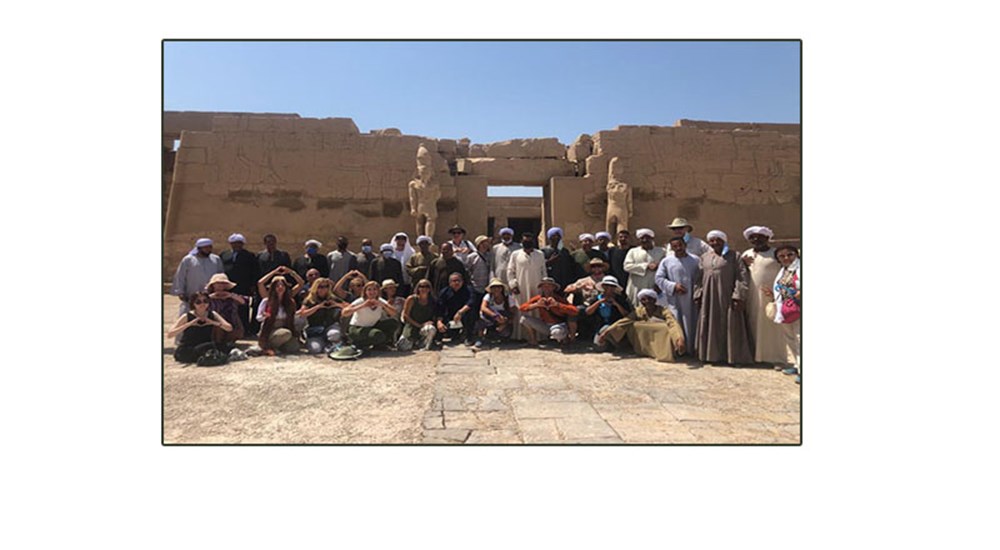 During his visit to Luxor, and following the resumption of touristic activity in Egypt at the beginning of September, The Minister of Antiquities H.E Dr. Khaled al-Anani inspected the temple of Karnak on Friday morning. He also examined the restoration of the ram causeway behind the first pylon.

During his tour of the temple, he met with groups of Ukrainian and American tourists. The expressed their amazement of ancient Egyptian civilization, and the meticulousness with which health and safety regulations were implemented in hotels, historical sites, and museums. This contributed to their feeling of comfort and safety while they enjoyed their holiday. They also took pictures with H.E the Minister.

H.E the Minister inspected the restoration project of the ram causeway located behind the first pylon of the temple of Amun Ra in Karnak. The Supreme Council of Antiquities initiated the project in May, after transporting four of the statues to Cairo to decorate Tahrir square.

Dr. Mustafa Waziri explained details of the project, clarifying that nine of the twenty-nine ram statues were completely restored, and the rest are undergoing restoration.

It is important to mention that these statues were in a horrible state of preservation because of detrimental restoration techniques employed in the beginning of the 70’s and after the inauguration of the Sound and Light show in the Karnak temple. These rams were restored and raised on a layer of modern rubble covered with mortar and red bricks as well as small pieces of stones. This construction allowed groundwater to seep in into the bases of the rams, eroding the statues.