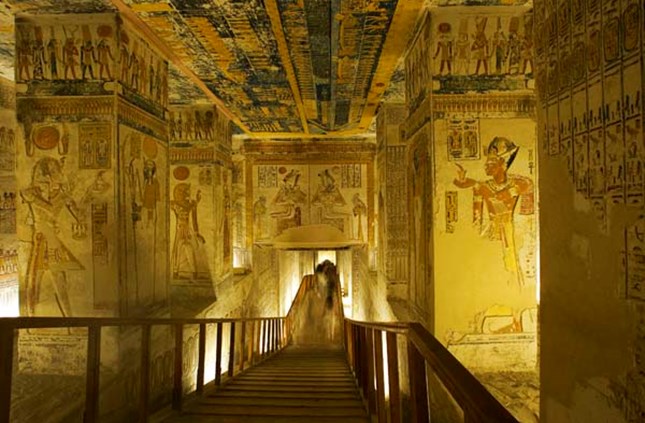 Valley of the Kings

This tomb was begun by King Ramesses V (c.1147–1143 BC) of the Twentieth Dynasty. Although it is uncertain whether he was ultimately buried here, it is clear that his uncle Ramesses VI (c.1143–1136 BC) enlarged the tomb and used it for his burial.

The tomb is simple in plan, essentially consisting of a series of descending corridors that lead deep underground, in a straight line to the burial chamber. The exquisitely painted sunk relief walls are very well preserved.

The tomb’s decorative programme consists of various funerary texts to help the king in his successful transition to the afterlife. The first descending passages are decorated with the Book of Gates, Book of Caverns, and Books of the Heavens, ancient Egyptian books of the afterlife. The passages beyond bear scenes from the Amduat, the Book of the Dead, and the Books of the Heavens, and scenes from the Book of the Earth adorn the burial chamber. All ceilings are decorated with astronomical scenes and texts. Some of these funerary texts are collections of spells, and others are maps of the underworld, describing the sun god’s daily nocturnal journey through it. Through them, just like the sun god, the king could achieve a glorious rebirth in the eastern horizon at dawn.