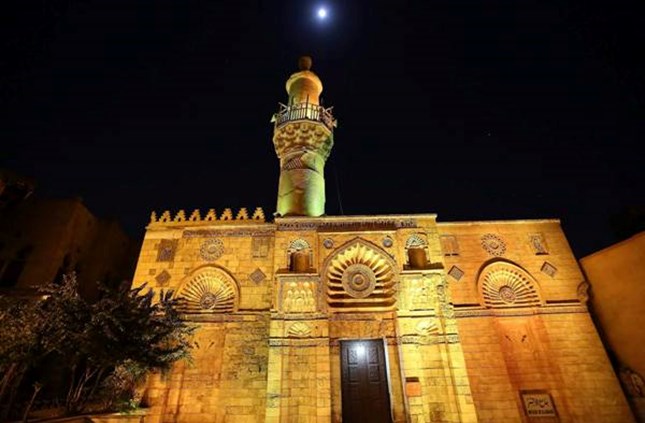 Al-Aqmar mosque is located on al‑Mu’izz Street, and was commissioned by the Fatimid Caliph al‑‘Amir bi‑Ahkam Allah in 519 AH / 1125 AD. The mosque’s construction was supervised by the Vizier al‑Ma’mun al‑Bata’ihi, and it was renewed during the reign of Sultan Barquq in 799 AH / 1397 AD under the supervision of the governor Yalbugha al‑Salmi.

The main façade of the mosque is presently the oldest surviving stone façade. Its architecture is characterized by its intricate stone carvings and the repetition of the phrase “Muhammad and Ali”, in addition to Qur’anic verses written in the Kufic script. The engineer’s ingenuity is most manifest in his ability to orient the façade to the street, whilst maintaining the direction of prayer inside the mosque.

When the Coptic Museum was built in the twentieth century, its façade was influenced by al‑Aqmar Mosque’s architecture, but with Biblical verses and Christian iconography. The mosque consists of an open courtyard at its center surrounded by four riwaqs (arcades) topped by shallow domes, the largest of which marks the qibla, the direction of prayer. An inscription above the mihrab (niche in the wall of a mosque marking the qibla) records the renovations that were undertaken by Yalbugha al‑Salmi.