The Abbasid Caliphate (132-923 AH/749-1517 AD) was founded by Abul Abbas ibn Muhammad (known as al‑Saffah) after defeating the Umayyad Caliphate. Lasting from 750 to the destruction of its then‑capital, Baghdad, in 1258 AD at the hands of the Mongols, this caliphate was one of the longest‑lived and prosperous in Islamic history. This was also a cultural high point in human history, when science, philosophy, medicine, and mathematics flourished.

With the defeat of the Umayyad Caliphate, Egypt became a part of the Abbasid Caliphate, and a new capital was founded, al‑Askar, near al‑Fustat. Very few monuments survive from this period, however. The Abbasids, were keen to administer this territory properly. In order to set accurate taxation levels, the Nilometer on Rawda Island was built during the reign of Caliph al‑Mutawakkil (847–861 AD). It is the oldest monument since the Arab conquest of Egypt that survives relatively unchanged.

Egypt remained a part of the Abbasid Caliphate from its founding in 750 AD until around 850 AD when, after a period of revolts and turmoil, the governor Ahmad ibn Tulun managed to make Egypt independent in 868 AD, ushering into the Tulunid Period. 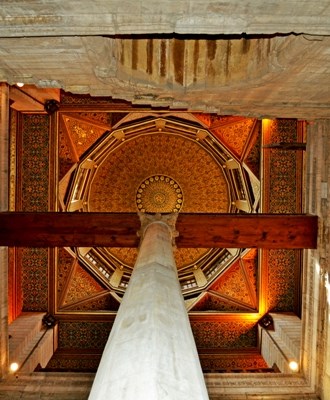