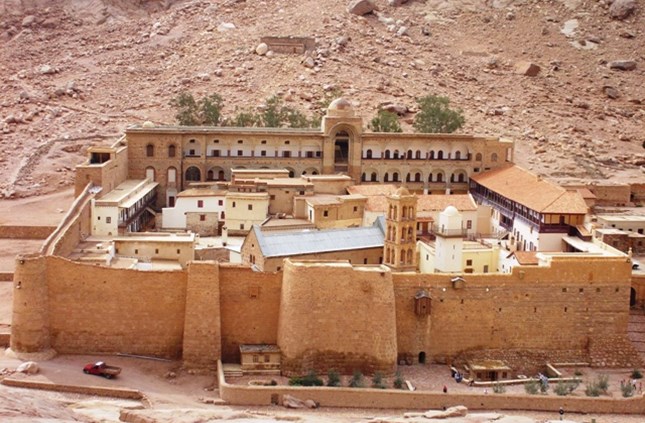 On the slopes of Mount Sinai, where Moses received the Ten Commandments from God, lies one of the oldest functioning monasteries in the world. It was built by order of the Byzantine Emperor Justinian I (527–565 AD) in 548–565 AD. The eponymous Saint Catherine of Alexandria was martyred in the early 4th century AD. The monastery bears her name because its monks discovered her incorrupt body on nearby Mount Saint Catherine in the 9th century AD, where it had been deposited by angels after her martyrdom.

The monastery, which was added to UNESCO’s World Heritage List in 2002, encompasses multiple structures, the most important of which is the Church of the Transfiguration of Christ the Savior, which itself contains nine smaller churches. One of these is the Church of the Burning Bush, from which God spoke to the prophet Moses. Saint Catherine’s Monastery also includes ten other churches, the monks’ accommodations, a refectory, an olive press, ossuaries, a Fatimid mosque from the 12th century AD, and a library that boasts rare books and 6,000 manuscripts.