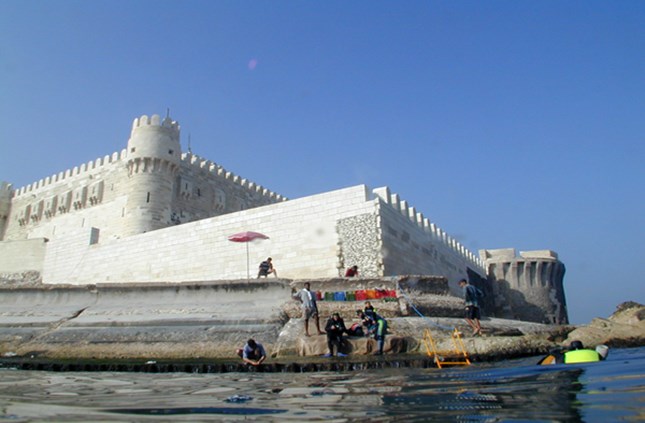 The site lies at a depth of 6–8 m, covering an area of 2.25 ha in Alexandria. It dated to the Greco-Roman period but it includes artifacts from the Pharaonic period. Some of these artifacts are the remains of the lighthouse itself and the rest were brought from the Serapeum and thrown at the entrance of the harbor to prevent the entry of enemy fleets in the twelfth century A.C. Most important discoveries: - At a depth from 6 to 8 meters more than 3000 pieces were located, including statues, sphinxes, and columns of different shapes, capitals and bases of columns and parts of obelisks. - Blocks from different sizes and weights (some of them weighing75 tons). The artifacts’ materials aresuch as: granite, calcite, quartzite, limestone, sandstone and greywacke. - North of Qaitbay three wrecks were located. No wood remained, but amphorae, daily utensils as well as metal and stone anchors were found. The wrecks span from the third century BC to the seventh century AD. - fourth wreck was located to the west, carrying blocks of limestone probably from EI-Mex quarry, some 10 km west of Qaitbay, that were likely intended for construction purposes in Alexandria.