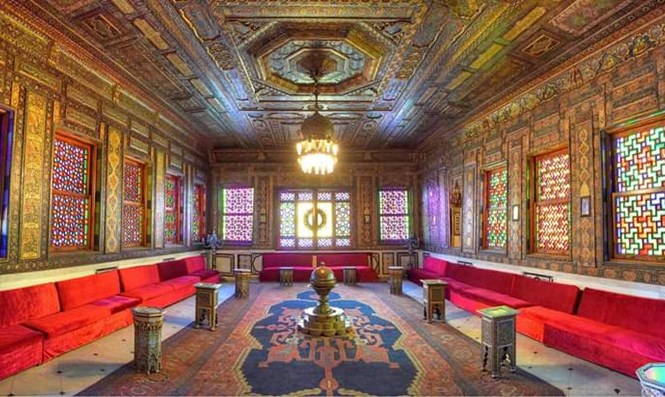 The other room beside the ceremonies room was built for VIP guests to set in waiting the prayer time especially in Fridays at the room beside the mosque of the palace, the ceiling and walls covered by wooden star polygon.

The ceiling and walls covered by wood star polygons.

There was a wooden stair leads to upper floor , at the middle of the stair step there was a window over looking the garden with colored glasses , below the window there was a small model of “ Kayt Bay MAsjd” made of wood  inlaid with mother of pearl  by the  Egyptian hands of industrial school(school craftsmen) of his mother “Amina Hanem ELhamy “, a chandelier hanging from the ceiling in the shape of bell.

In the upper floor there was two types of rooms.

On the right side there was A Syrian Typed Saloon, where ceiling and walls covered by wood brought from “ Byt el-Azm” in Syria dated from 1081 heigrai.

Beside the main room there was a room for women , contains two mirrors, there was a window over looking the garden .

On the left side there was the eastern hall shaped by Maghrabian type, a room full of mirrors, the ceiling covered with mirrors also underneath the wood ,a chandelier hanging from the ceiling modeled by “Mamluke “ design