These icons date back to the eighteenth & nineteenth centuries AD & represented scenes from the Old and New Testaments, the Blessed Virgin, some saints & martyrs, some of these icons bear the name of their artists and the names of the churches that were holding them. Among the most important icons the one of the Holy Family’s trip to Egypt, and the icon of St. Anthony of St. Paul who lived in a desert retreat near the Red Sea during the third and fourth centuries AD. 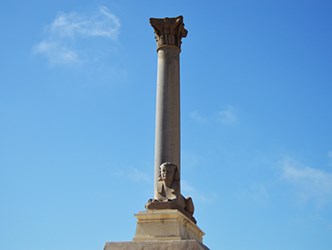 30 BC - 395 AD
Roman Period
After the commander Octavian (August) defeated Antony and Queen Cleopatra VII in 31 BC. in the  Battle of Actium,  Egypt lost its independence and became a Roman province ruled by the Roman Emperor, who was officially designated as Pharaoh and the country was divided into three regions, each of which was governed by a local governor, but all were under the authority of the emperor. Rome exploited Egypt's resources economically. Some emperors paid much care for Egypt in particular, such as the Roman Emperor Hadrian who visited Egypt and founded a new Roman settlement called Antinopolis. The Romans also developed new technologies for the development of agriculture, where they built new water canals and dams, as well as increased grain cultivation and expanded wine production. All these agricultural reforms were principally aiming to remain the Province as "the breadbasket in the ancient world", no more. Life in Egypt was influenced by the multiculturalism that was common during the Roman Kingdom; also a unique artistic style emerged as a result of blending of the Egyptian, Greek and Roman artistic influences. The Egyptian intellectual influence was appeared in the prevalence of Isis worship throughout the Roman Empire.  In 285 AD, the Roman Empire split into the Eastern and Western Empires. The Roman Empire ended with the fall of Rome by the Berber attacks, while the Eastern Empire remained known as the Byzantine Empire in 330 AD.
Read More
Byzantine Era
330
AD
-
641
AD
330 AD - 641 AD
Byzantine Era
In the late Roman period, Egypt is known as the Byzantine Egypt or the Coptic period since the reign of the Roman Emperor Diocletian in 284 AD until the Arabs conquest of Egypt in 641 AD. The reign of Emperor Diocletian witnessed the most aggressive persecutions in the Roman history, especially against the Egyptian Christians. The Copts chose the year of Diocletian's ascension to the throne as the beginning of their calendar, which was called the calendar of martyrs. The Egyptian Christians suffered persecution until the Edict of Milan's issuance in 313 AD in which Christianity was granted equal rights to other religions by Emperor Constantine I, who ruled the Western Roman Empire. In 324 AD Constantine I defeated Licinius, the ruler of the Eastern Roman Empire, and Constantine I became the only Emperor of the Roman Empire who transferred the headquarters to the new Capital Constantinople after its foundation in 330 AD.
Read More