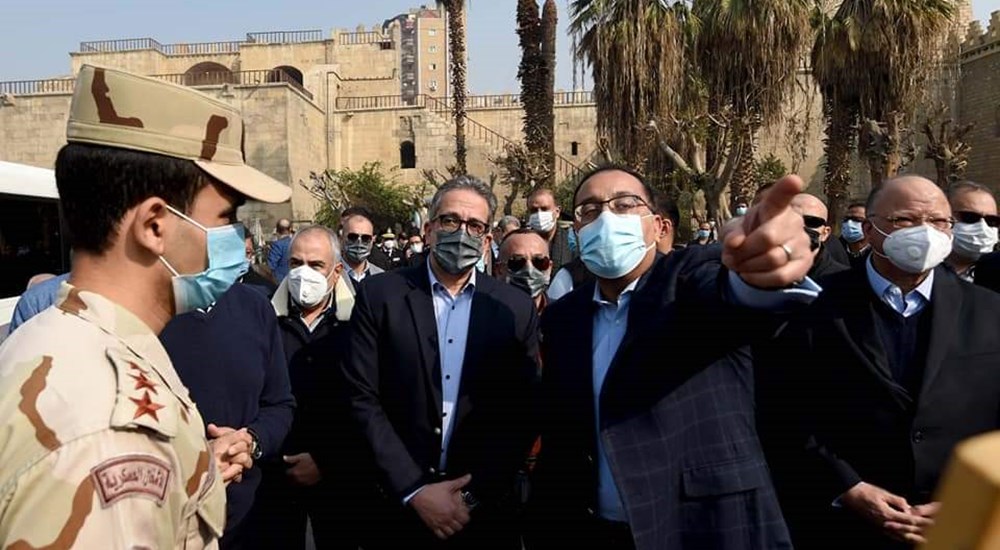 Madbouly directs to attach great importance to the ancient mosques located in the vicinity of Darb Al-Labbana Square, especially the Sultan Hassan Mosque, one of the most important Islamic monuments

This morning, Prime Minister Mostafa Madbouly toured a number of development projects to revitalize Historic Cairo, to follow up the progress of work and the percentage of work implementation, accompanied by Dr. Khaled El-Anany, Minister of Tourism and Antiquities, and Dr. Assem El-Gazzar, Minister of Housing, Utilities and Urban Communities, Major General Khaled Abdel-Al, Governor of Cairo, Engineer Randa El-Minshawy, First Assistant to the Prime Minister, Eng. Khaled Siddik, Chairman of the Board of Directors of the Urban Development Fund, and representatives of the Engineering Authority of the Armed Forces.
The Prime Minister stressed that the government is keen to intensify meetings and field visits for the completion of this important civilizational project, based on the state’s great interest in developing historical areas, and re-showing their cultural splendor and historical value, so that they become distinct tourist destinations that attract the attention of visitors from different countries of the world.
The Prime Minister and his entourage began the tour from the area surrounding the Al-Hakim Mosque, where he inspected the building development works in the area, which included insulation works, roof tiles, developing and re-painting facades, installing wooden mashrabiyas according to the approved architectural design, installing crushing stones on the entire ground floor, and changing doors Shops, repainting the entrance door. It was noted that the facades are being developed for 48 buildings, 10 of which have been completed, and the Prime Minister has seen part of them.
Madbouly also learned about the situation of removing the ruined buildings in that area, and the financial compensation spent, and listened to an explanation of the work being carried out to rehabilitate and revive the area, through the restoration and re-use of registered heritage buildings, as well as buildings of unregistered value, along with The development of many buildings in the area, and it was noted that the waste removal of the destroyed buildings.
The Prime Minister also followed up on the project of establishing a tourist hotel of a historical nature at the El Shorbagy Agency site, which provides a distinctive experience of accommodation for those wishing to visit this region and learn about the secrets of its civilization. And Darb Al Maghariba, and Bab Al Fotouh, which includes 28 hotel rooms, each room with an area of ​​35 square meters, 8 hotel suites, with an area of ​​51 square meters per suite, and two suites, each with an area of ​​81.5 square meters.
Dr. Mostafa Madbouly directed to quickly pay compensation to the eligible owners of the ruined buildings that will be removed, and to complete the restoration of all buildings of an archaeological and historical nature in the area, while continuing to unify the facades on Al-Moez Street to give a visual identity to this distinctive archaeological site, and also directed to cover the side streets with basalt stone, And the speed of forming an entity to manage and maintain this area to preserve it.
Then, Dr. Mostafa Madbouly, Prime Minister, and his escorts moved to the Derb Al-Labbana area, where he continued the development and revitalization work of the area, which is being implemented by the Engineering Authority of the Armed Forces, including the development of the garden of the Mahmoudiya Mosque in the Labbaneh area, and it was noted that the development in the area includes the development of The facades, the restoration of ancient buildings, then the construction of new buildings within the development plan. A 2,000-acre garden is being developed, surrounded by the Qani Bay Al-Ramah Mosque and the Mahmudiya Mosque, overlooking the Sultan Hassan Mosque, Amr Ibn Al-Aas Mosque, and the wall of Salah El-Din Castle.
Dr. Mostafa Madbouly directed that great importance be given to the ancient mosques located in the vicinity of Darb Al-Labbana Square, especially the Sultan Hassan Mosque, which is one of the most important Islamic monuments in Egypt.