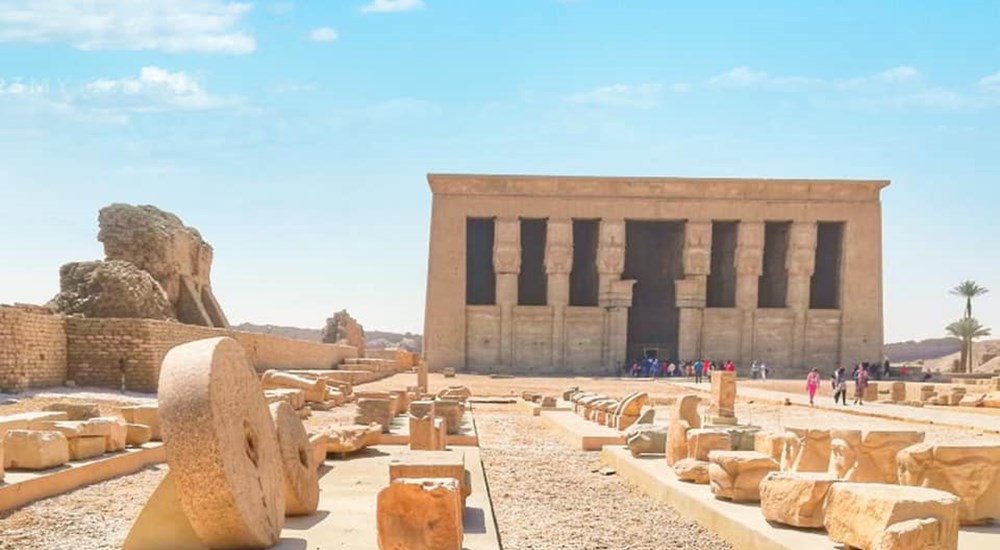 The Ministry of Tourism and Antiquities has completed the second phase of the project to restore and develop the Dendera Temple in Qena. Dr. Mostafa Waziry, Secretary-General of the Supreme Council of Antiquities, explained that the work at this stage included the restoration and cleaning of the Great Pillars Hall, the Al-Ishraq Hall (Al-Tajli II), and the development of the internal and external lighting systems of the temple, indicating that works are still continuing inside the side rooms surrounding the second transfiguration hall in preparation for its new opening.

Mr. Abdul Hakim Al Sagheer, Director of the Temple of Dendera, indicated that the maintenance and restoration work included removing the soot from the archaeological surfaces constructed from sandstone by using paper compresses to remove them. In addition to fixing the colors, completing the gaps in the walls and ceilings, and replacing the old completions. This made the inscriptions show in their original colors with clarity of scenes and texts. It was also stated that the restorations will be in progress until completed on time.

The Ministry had also completed the work of the first phase, which included the restoration of the Mamizi (the Roman birth house), the main temple gate on the north side, showing the colors on the lintel and ceiling of the gate, cleaning the straight descending staircase of the temple, the hall of the great columns, three basements, and the roof of the temple.

Regarding the restoration work, Mr. Abdel Hakim Al-Sagheer pointed out that the Supreme Council of Antiquities began the project of restoration and maintenance of the temple in 2005, stopped in 2011 and then resumed in 2017, after the completion of the necessary scientific and archaeological studies along with careful experimental studies using the best methods and modern techniques. The temple was suffering from a deterioration of the wall carvings and the colors they bear as a result of the layers of soot rising from the fumes due to many factors. These factors included cooking food, burning wood and using it for lighting, in addition to dust and surface plankton caused by the wind that resulted from the use of the temple as a house in previous eras.

In 2019, the Ministry started a project to develop the courtyard of the Temple of Dendera in cooperation with the French Archaeological delegation to turn it into an open museum for the stone artifacts and elements that had been lying on the temple grounds since their discovery. They were placed on a number of stone terraces on the left side of the main entrance gate of the temple. The pieces that were in the Mammisi storehouse (birth house) were also placed in the temple.

The three basements that were opened for visiting are considered among the 12 basements that were closed in the temple, except for one of them located behind the Holy of Holies, which was open for visiting. The remaining 11 basements were closed until the restoration of the three was completed and opened for visitors. In addition to a panorama (rood) of the temple, which was restored and also opened to visitors after being closed for many years.

In order to link Egyptian school students and their families to the archaeological sites and to introduce them to the Temple of Dendera and to develop the archaeological awareness of the surrounding environment during the visit to preserve the antiquities, a booklet was created on the Temple of Dendera to take every visitor on an exploration trip inside the temple in which he or she gets acquainted with information about the temple, the date of its construction, and its unique architectural composition. The booklet provides information in a simple way through some questions and interactive activities that the child will perform inside the temple with his family or friends.

The temple of Dendera was built to worship the goddess Hathor, the ancient Egyptian goddess of love, beauty and family on the western shore of the Nile. Its construction dates back to the Greco-Roman era, when King Ptolemy III built it from sandstone, Many Roman emperors kept adding to it making the process of building last for about 200 years.

The temple is characterised by its unique architecture, rich in paintings and inscriptions. Its walls and columns are decorated with hieroglyphic writings and carved statues with precision and beauty.

The inscriptions on the inner walls of the temple show the Roman Caesars Augustus, Tiberius and Nero making offerings to the gods as the ancient Egyptians used to do.

The temple is distinguished by its astronomical paintings that adorn its ceilings, which are considered a creative masterpiece, as it is one of the most prominent architectural masterpieces in the history of ancient Egypt. The upper ceiling can be accessed by stairs decorated with views of the priestly processions as they go up the stairs carrying the statues of Hathor in wonderful Pharaonic inscriptions, which represent the celebrations of the New Year .

The façade of the Temple of Hathor is one of the most amazing ancient Pharaonic façades of all temples, with a width of 35 meters and a height of 12.5 meters. The façade of the temple is led by impressive huge columns, the top of which is crowned with drawings of the heads of the god Hathor (Hathorian faces), as well as the second temple of the divine birth that was built during the reign of Augustus and which contains a prominent inscription that embodies an imaginary gate that reaches to the other world, topped by three winged sun disks, then a row of cobra snakes crowned with sun disks. The number of columns that bear the roof of the temple hall is 24, in addition to a large number in the rest of the temples from the inside. These columns are surrounded by a group of offering rooms.

The catacombs of the Temple of Dendera:

It is the place designated for festive celebrations in ancient Egypt, and golden statues of deities and ritual tools necessary to hold religious rituals The precious statues and valuable tools are kept inside, and it includes an important set of inscriptions and scenes, including the view of the opening of the stone door, and a winged disc that pushes the winged sun In front of him between the signs of East and West, and the ritual of offering bread to the goddess Hathor. The Lady of Dendera, in addition to the ritual of stabbing a crocodile in front of Hur with two images of the seven Hathorat scenes.