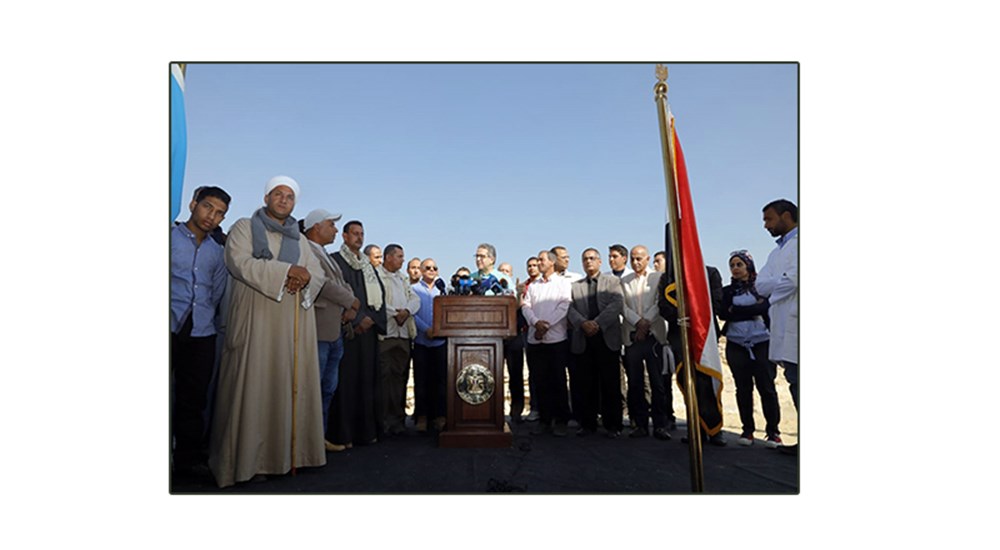 H.E. The Minister of Antiquities, Dr. Khaled El-Enany, announced on Saturday at an international press conference a new archaeological discovery in Saqqara. The discovery was carried out by an Egyptian archaeological mission, headed by Dr. Mostafa Waziri, Secretary General of the Supreme Council of Antiquities, during its work at the animal cemetery. This area is situated next to the cemetery of elites and the animal cemetery discovered last year.  The area also includes the beautiful tomb of Wah-Ti, also discovered the previous year. The press conference was attended by more than 40 ambassadors of Arab and foreign countries in Egypt and their families, a group of public figures and members of the House of Representatives, in addition to a large number of local and international newspapers, news agencies and television.

The Minister of Antiquities explained that he is not announcing a new archaeological discovery, but rather announcing an entire museum. In addition to this, H.E. stated that he has the honor of now standing at this very same spot for the third time to announce a new discovery. The discoveries include: a collection of 75 wood and bronze cat statues of different shapes and sizes; 25 wooden chests decorated with different materials and inscribed with hieroglyphic texts containing cat mummies; wooden statues of different animals, such as ichneumons (Egyptian mongoose), Apis Bulls, small crocodiles, and the god Anubis; two ichneumon mummies; a large stone scarab and two smaller ones made of wood and sandstone; a wooden ibis statue; a collection of statues of deities, including 73 bronze statues of Osiris, 6 wooden statues of Ptah‑Sokar, 11 faience and wooden statues of Hathor; a wooden statue of the goddess Neith.

H.E. Dr. Khaled El-Enany added that the mission also discovered small limestone coffins of cats, which were sacred to the goddess Bastet, as well as a limestone stela recording the Horus name of name of king Psamtik I of the 26th Dynasty. There was also a wooden chest containing the remains of a golden mask. The discovery included two wooden statues of ladies, one of which had the head of a cobra. Other cobra statues were also discovered, as well as amulets, the head of an ibis, a wooden naos holding within it a small statue of the falcon Sopdu, three statues of the falcon god Horus, a collection of amulets of different shapes and sizes, some of which were found inside the linen wrappings, faience shabti statues, a collection of papyri fragments containing illustrations of the goddess Tausret, several colored wood and mud funerary masks, and a wooden headrest.

H.E. the Minister of Antiquities stated that the several large mummies were discovered, five of which probably belong to lion cubs. These mummies date to the seventh century BC and the rise of the 26th Dynasty. The archaeologist Alain Zivie discovered a lion skeleton nearby.

Dr. Mustafa Waziri clarified that the of the most important of the discovery are three mummies of large cats. The preliminary study revealed that they likely belong to lion cubs. These studies were carried out by Professor Salima Ikram and Professor Richard Ridge, both of whom specialize in animal mummies. The shape and size of the mummies strongly suggests that this hypothesis is almost certainly correct, and that the cubs are most probably around eight months of age. Dr. Waziri said that more studies are required and will be carried out in the coming weeks to confirm the results. Studies will also be done on the rest of the mummies to determine their species. Dr. Waziri confirmed that if studies were to prove that these mummies belong to cubs, this will be the first discovery of its kind.