International press conference following the inauguration of the “Tutankhamun: Treasures of the Golden Pharaoh” exhibition. 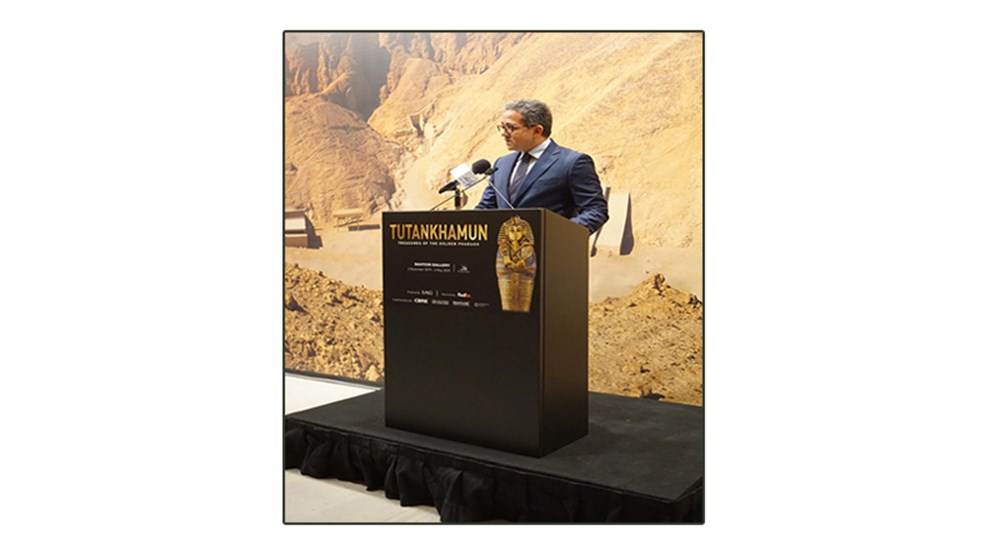 H.E the Minister of Antiquities Dr. Khaled al-Anani held an international press conference in London a few hours before the official opening of the the Tutankhamun exhibition. The conference included four hundred international reporters and photographers from different English, Arab, and international newspapers and magazines.

During his talk, H.E Dr. Khaled al-Anani spoke about Britain’s admiration of the young king and his treasures. This admiration, he explained, has a long history that begins in 1922, with Howard Carter’s discovery of the tomb of the Golden Pharaoh in the western bank of Luxor.

H.E said that the belongings of the young king came to London twice. The first of those visits was in 1972, where the exhibition attracted more than 1.7 million visitors. The second took place in 2007, and now the exhibition is taking place for the third time.

H.E the Minister expressed his certainty that the young king comes to London on this day brining with him the sun, love, and peace from the Egyptian people.

H.E the Minister also took this opportunity to implore all those present not to stand silently in the face of the illegal and unethical trade in antiquities, and selling historical objects without legal documentation. There needs to be an effort to protect the right of future generations to enjoy human cultural and archaeological heritage.

During his talk, H.E Dr. Anani invited all those present to visit Egypt, which will greet them with open arms, especially after the establishment of direct flights from London to Sharm al-Sheikh. H.E the Minister of Antiquities took this opportunity to mention the archaeological museum of Sharm al-Sheikh, which will be inaugurated soon by the Ministry of Antiquities. The museum will serve as a new touristic attraction. H.E the Minister of Antiquities also invited them to attend the celebrations held in honour of transferring the royal mummies from the Egyptian museum in Tahrir to the National Museum of Egyptian Civilization in Fustat. He also implored the media to pay close attention to new archaeological discoveries in the next coming weeks.