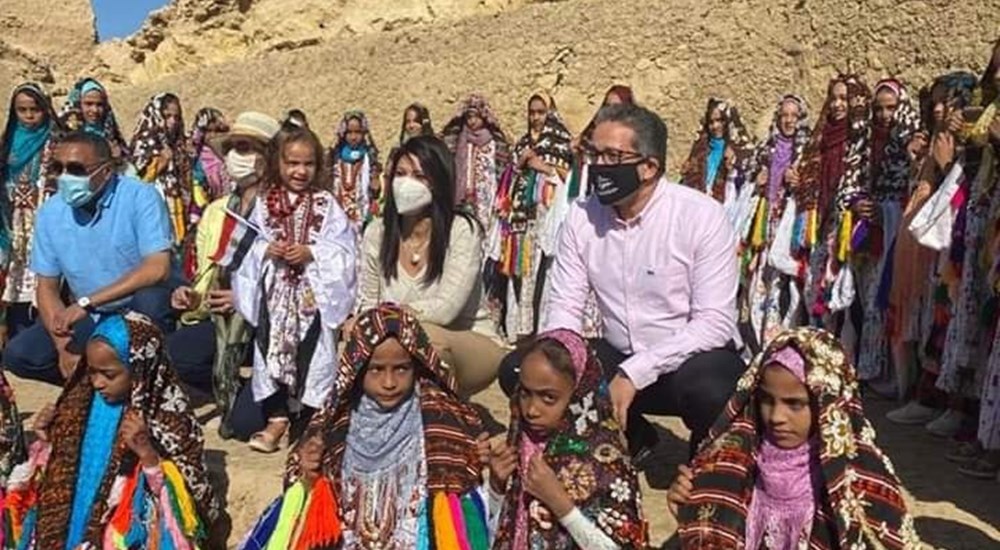 Today, Dr. Khaled El Enany, Minister of Tourism and Antiquities, inaugurated the Shali Castle and Aghurmi Mosque in Siwa Oasis in Matrouh , after completing their restoration, as part of the project to revive the historic Shali village.

The opening was attended by Dr. Yasmine Fouad, Minister of Environment, Dr. Rania Al-Mashat, Minister of International Cooperation, Major General Khaled Shuaib, Governor of Matrouh, Dr. Osama Talaat, Head of the Islamic, Coptic and Jewish Antiquities Sector at the Ministry, Dr. Munir Neamat Allah, Chairman of the Board of Directors of the International Environmental Quality Development Company for Small and Medium Enterprises, in addition to a representative of the European Union, and 20 ambassadors from around the world.

During his speech, Dr. Khaled El Enany expressed his happiness to announce the completion of the restoration project of Shali Castle, which he announced in 2018 during the opening of the Tandi Mosque after its restoration, noting that the ancient mosque was also opened in 2015 after its restoration.

The minister also explained that this project will provide an opportunity for visitors and tourists to wander around the city of Shali and its various arcades, and move between houses and mosques to see the distinctive architecture of the city built from the archive (building material of mud and salt), which brings them back in time for more than 800 years past.

The minister talked about the distinctive tourist components and patterns that Siwa Oasis enjoys, as it is a unique and charming place with natural components, heritage and distinguished cultural sites, as there are remnants of ancient Egyptian temples and ancient monuments such as the Temple of Amun and Mountain of the Dead, in addition to it having an environmental tourism product which is sulfur eyes like Cleopatra's eyes.

The minister pointed out the importance of working to raise the efficiency of the infrastructure in the oasis by developing roads, establishing an airport there, and providing more means of transportation.

The minister concluded his speech by emphasizing that heritage preservation attracts more tourists and contributes significantly to the development of the local community by providing job opportunities and a greater opportunity for sustainable economic growth.

After the inauguration, they visited the city of Shali, and the Aghurmi Mosque was inaugurated.

During the visit, Dr. Khaled El Enany exempted the tenants of the shops selling authentic products in Shali Castle from paying the rental value till the end of the current year, as part of the efforts of the Ministry of Tourism and Antiquities to mitigate the economic effects resulting from the emerging Corona virus crisis; in addition to the encouragement of traditional crafts made by the people of Siwa.

It is noteworthy that the project to revive the historical village of Shali includes the restoration of the Shali Fortress in the Siwa Oasis, and the project is funded by the European Union( 90% )at a cost of around 600 thousand euros, and the International Environmental Quality Development Company for Small and Medium Enterprises contributes 10% of the project value.

In addition to that, 95% of the wall surrounding Shali Fortressa has been restored, and the walls became clearly visible from several angles, and the demolished parts of the city walls have been installed, restored with the same materials as the original of the old city, and the streets and corridors of the old castle were opened after removing the accumulation of archives on them.

The works began with the restoration of the ancient mosque, which is the oldest mosque built with mud in Africa, and was inaugurated in December 2015, as well as the restoration of the Tandi mosque, which was inaugurated in October 2018, and the work was completed by restoring the rundown parts of the walls surrounding the castle, and re-planning it The ancient architecture built on it, opening its alleys and restoring parts prone to collapse.

The ancient city of "Shali" includes 6 deep water wells that served the people of the oasis in drinking water. The restoration work has been completed, making the village eligible for a visit with its ruins, reflecting the city's history and its historical value.

The village of Shali in Siwa Oasis - Matrouh Governorate is subject to Article 20 of the Antiquities Protection Law No. 117 of 1983 and its amendments, according to the explanatory memorandum published in the Egyptian newspaper Al-Waqi’a No. 246 in October 2009.

"Shali" is a Siwi word meaning city. The village of Shali was built from the material of the archive, which is clay saturated with salt. If it dries up, it becomes similar to cement in its hardness. It is a unique style of construction, and it dates back to the sixth century AH / twelfth century AD.

The city is surrounded by a sturdy building wall that has only one entrance called the Bab Anshal, meaning the Gate of the City, and on the northern side of the city wall there is the ancient mosque, and after a century passed, a second gate was opened on the southern side of the wall near the oil press called (Bab Athrat), meaning the new door and a third door opened after a century had passed, called the door (Qaduha) for women only.

The city includes the Al-Ateeq Mosque and the Sheikha Hasina Mosque, known as the Tandi Mosque, in addition to the city's houses and ruins of its buildings.