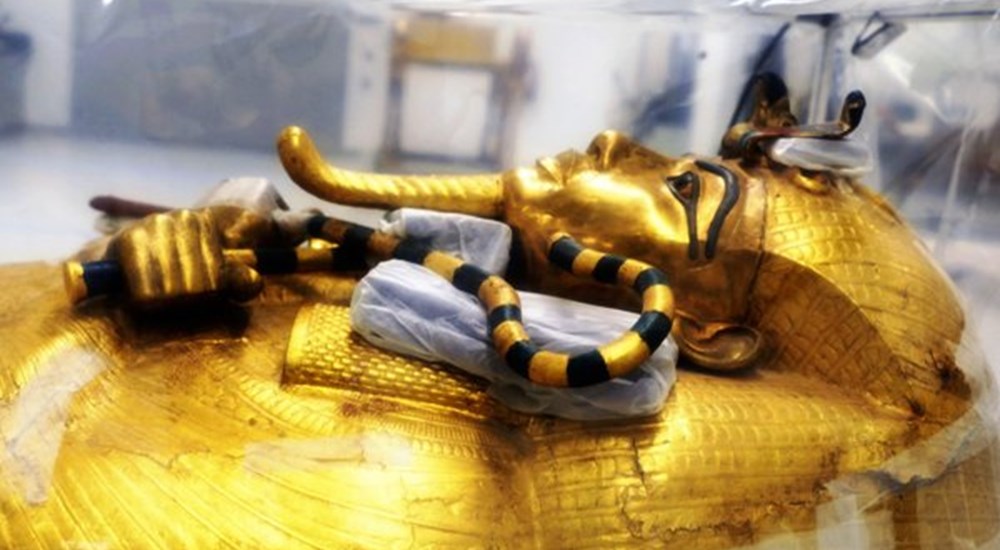 Tutankhamun, also known worldwide as the Golden Pharaoh, was an 18th Dynasty king of the New Kingdom. He is best known for his intact tomb and treasured funerary collection. The King's mysterious death at a very young age has continued through the years to fascinate millions throughout the years.

He was buried within his tomb (KV62) located at the Valley of the Kings, on the west bank of Luxor and was discovered in November 1922 by the British archaeologist Howard Carter. The discovery at that time received worldwide press coverage, capturing public imagination.

The king’s burial chamber is 6m x 4m wide and housed the king’s outermost rectangular-shaped quartzite sarcophagus. Its four corners are decorated with figures of the four deities of protection whose outspread wings safeguard the sarcophagus and the mummy of the king. It contains three anthropoid coffins nested within each other depicting the king in the Osirian position.

The Innermost Gold Coffin
This innermost coffin is mummy shaped and made of solid gold that weighs 110.4 kg. It was found wrapped in linen inside the middle coffin. Both are now on display at the Egyptian Museum Cairo. Inside it lay the king’s mummy whose head was covered with the iconic gold mask of the boy king.

The Middle Gilded Coffin
This coffin is made of gilded wood inlaid with multicolored glass. It was found inside the outer gilded coffin and is currently exhibited at the Egyptian Museum Cairo.

The Large Outer Gilded Coffin
The outer coffin is made of gilded wood portraying the king in the Osirian shape, with arms crossed upon his chest and holding the insignia, the flail and the crook ornamented with blue and red glass. The coffin has silver handles that are used to move the lid. The coffin's measurements are 223.5cm in length, 83.8cm at its widest point and 105.5cm at its highest point.

Soon after the discovery of the tomb in 1922, both the inner and middle coffins were transferred to the Egyptian Museum Cairo; while, the outer gilded coffin was left inside the tomb.

On 12 July 2019, the outer coffin was transferred to the Grand Egyptian Museum (GEM) for restoration and preservation and to be exhibited at the GEM upon its opening among the boy king’s treasured collection, including the two other coffins. The golden pharaoh’s three coffins will be displayed together for the first time since their discovery.

Preliminary examination carried out on the outer coffin inside the tomb revealed that it was suffering from general weakness and it had also developed cracks in its gilded layers of plaster especially those of the lid and base. An immediate intervention to restore the coffin inside a suitable environment is now required.

The coffin was transported to the GEM amid tight security in cooperation with the Tourism and Antiquities Police, after securing safe moving procedures through the use of anti-vibration units and the coffin was packed with acid-free materials that absorb humidity.

At the GEM, the coffin was isolated in a separate room on 14th July 2019 for seven days prior to the commencement of the fumigation process, which began on 22nd July 2019. Restoration of the coffin will continue using un-invasive equipment to carry out analysis and scientific investigations. According to the results, a mechanical an chemical cleaning are to be carried out and any layers of plaster that have broken away will be replaced in their original location. A complete consolidation of the coffin will be implemented. The restoration work is expected to last at least eight months.