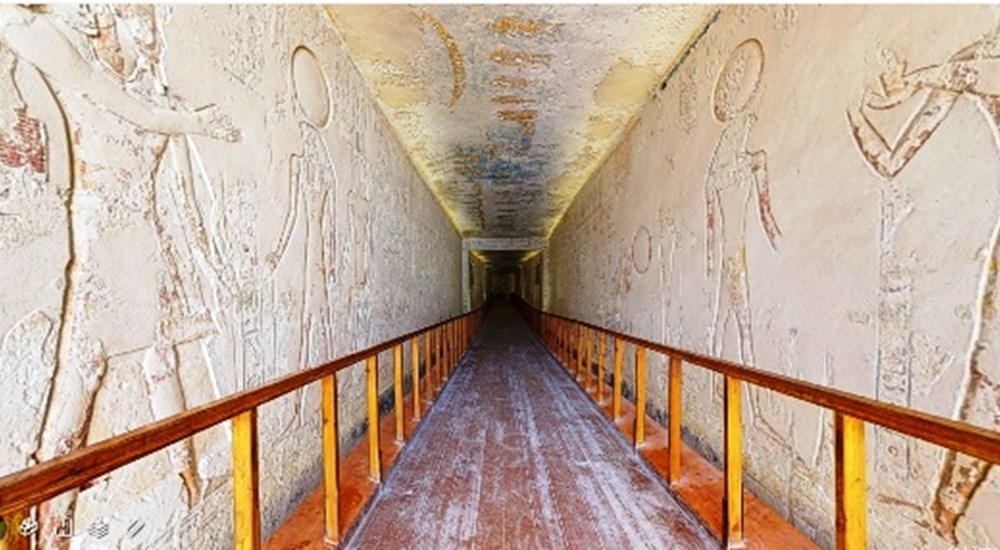 Today we take you on a virtual tour through one of the most beautiful tombs in the Valley of the Kings in Luxor. It is the tomb of Ramesses VI, with its exquisitely painted and well preserved wall reliefs.

This tomb was originally built by King Ramesses V (c.1147–1143 BC) of the Twentieth Dynasty. Although it is uncertain whether he was ultimately buried in it, his uncle Ramesses VI (c.1143–1136 BC) enlarged the tomb and used it for his burial.

The huts of the workmen who built this tomb were built directly on top of the ground that concealed the staircase that led into the tomb of Tutankhamun. In other words, it is this tomb that led to the discovery of Tutankhamun’s in 1922 with all of its world-famous treasures inside it.

The tomb’s decorated walls consists of various funerary texts to help the king in his successful transition to the afterlife, including the Book of Gates, Book of Caverns, the Amduat, and the Book of the Dead. All ceilings are decorated with astronomical scenes and texts. The ceiling of the burial chamber is decorated with a striking scene that depicts the sky goddess Nut arched over the earth. The sun disk is depicted in front of her mouth, which she is about to swallow. This is a mythological representation of sunset. Twelve sun disks can then be seen inside the extended length of Nut’s body, representing the sun god’s daily twelve-hour journey through the underworld at night, before his rebirth in the east, young, renewed, and full of life. Through this text, just like the sun god, the king could achieve a glorious rebirth in the eastern horizon at dawn.