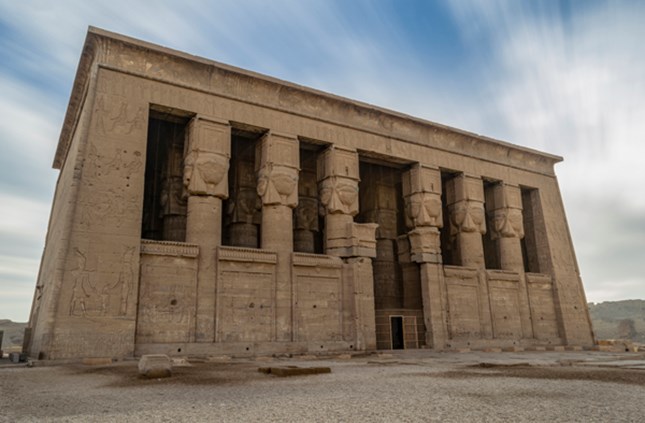 Hathor was among the most important and popular deities in ancient Egypt. She was associated with music, joy, dance and motherhood, she was also known as the lady of the sky. Her main cult center was at Dendera where one of the best-preserved temples in Egypt stands today. The entrance of the temple, with six massive columns surmounted with the head of Hathor,is considered among the most beautiful monuments in Egypt. Sistrums (a musical instrument) closely associated with the goddess, frame her head.

The temple of Dendera dates back to the Ptolemaic Period, although evidence points to older structures once existing on the sitedating as far back as  king Pepy II, from the Old Kingdom. Among the temple’s most notable features are astronomical engravings on its ceiling.

One of the primary celebrations that took place at Dendera was for the Egyptian New Year. The night before the new year, a statue of Hathor was brought out on a shrine and placed on the roof of the temple to receive the sun’s first rays, which symbolically renewed and the rejuvenated the goddess.