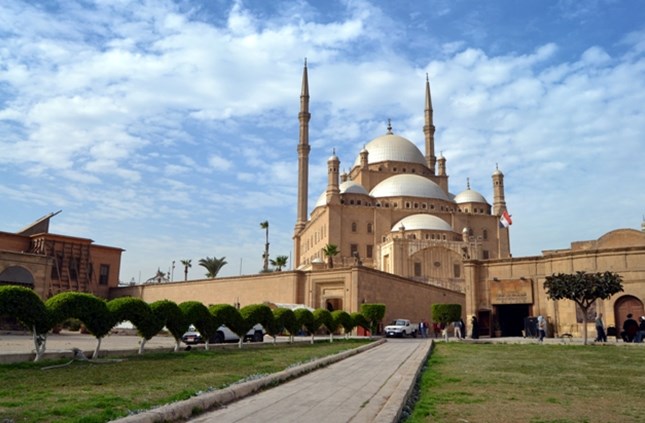 The Mosque of Muhammad Ali is located inside the Citadel of Salah al-Din al-Ayyubi (Saladin) in Cairo. It was built by Muhammad Ali Pasha in 1265 AH\ 1848 AD on the site of Mamluk palaces. This mosque is known as the "Alabaster Mosque", in reference to its marble paneling on its interior and exterior walls. The mosque’s twin minarets are the highest in all of Egypt, each reaching a height of 84 meters.

The mosque was built on the Turkish style that consists of an open court and prayer hall. The prayer hall is a square space that surmounted with a large central dome which surrounded by four semi-domes and four shallow domes in the corners. There are two minbars (pulpits) inside the mosque. The original of the two is made of wood decorated in green. The other was a later addition made of marble. ​

The outer open court contains a copper clock tower, which was gifted to Muhammad Ali Pasha by Louis Philippe of France in 1262 AH/1845 AD. Muhammad Ali Pasha reciprocated the gesture with an obelisk of Ramesses II’s (c.1279–1213 BC) that stood in front of Luxor Temple. Today, it stands in the Place de la Concorde Square, Paris.

Limestone is the mosque’s main building material. Its square plan consists of a central dome supported by four half.