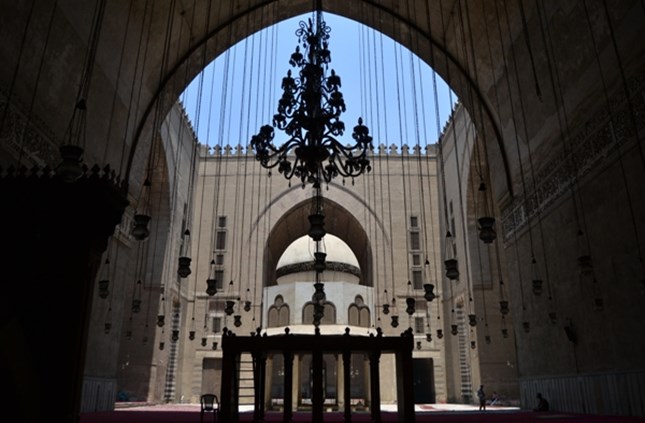 The Mosque and Madrasa of Sultan Hasan is one of the largest and architecturally exquisite mosques in all of Egypt. It was commissioned by the Mamluk sultan Hasan ibn al‑Nasir Muhammad ibn Qalawun sometime between 757 AH/1356 AD and 764 AH/1363 AD, and is located at the end of Muhammad Ali Street, opposite its nineteenth century neighbor al‑Rifa’i mosque in Midan al‑Qal’a (Salah al‑Din Square).

The historian al‑Maqrizi, writing in the fifteenth century, reports on the construction of the mosque, stating that the plagues that affected the population at the time did not put an end to the completion of the mosque. The total cost of the project exceeded one million dinars. Because the project was executed on such a massive scale, it attracted many artisans and craftsmen from different provinces of the Mamluk empire.

Its proximity to the citadel ultimately resulted in its use as a fort by enemies several times throughout its history. Some sultans seriously considered demolishing it because enemy armies would use the mosques high platforms to launch attacks on the citadel.

Like most Islamic monuments in Cairo, this one has also undergone several phases of reconstruction, up until the twentieth century. The interior and exterior domes of the mosque are extremely ornate, and their designs may have been inspired by Armenian art and architecture.

A monumental iwan opens up on each of the four sides of the interior square courtyard. An iwan is a vaulted rectangular space that is open on one side. Doorways at the four corners of the courtyard allow access into four madrasas, educational institutions, where the four Sunni Islamic schools were taught.