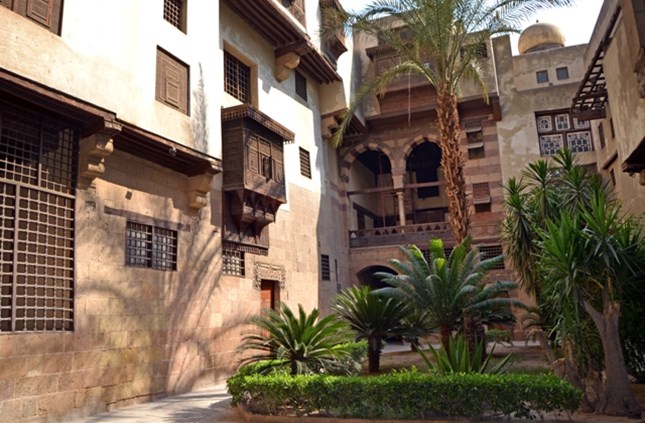 The house is located in al-Darb al-Asfar Lane in al-Gamaliyya in al-Muizz Street. It is one of the most beautiful examples of Cairo’s domestic architecture. Shaykh Abd al-Wahhab al-Tablawi established the first part of this house in 1058 AH / 1648 AD. The second and later section was set by Haji Ismail Chelebi in 1211 AH / 1796 AD, then he merged the two parts into one house. The house named after the last resident, Shaykh Muhammad Amin al-Suhaymi, who was a senior scholar of and the Shaykh of the Turkish riwaq of al-Azhar mosque in the Ottoman Period. ​

In 1349 AH / 1931 AD, al-Suhaymi heirs sold this house to the Committee for the Preservation of Arab Antiquities for the sum of six thousand pounds.

Among the house’s unique elements are the birthing chair, the bathroom, and the wells that provided water to the house. A waterwheel irrigated the garden, and its wooden gear survives. There is a mill activated by a bull. Nearby, pottery and stone vessels preserved grains.