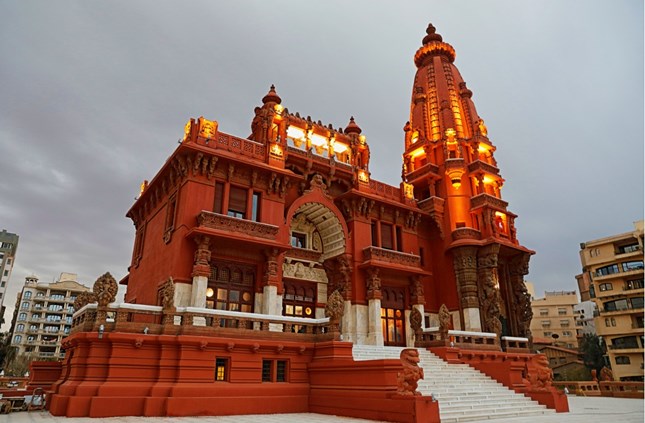 Baron Empain's palace, with its Indian style, and its tower stands out in the desert landscape, is distinct from the rest of the city. The palace reflects the high status of its owner and marks a major milestone in the urban landscape of Heliopolis. Baron Empain's palace is the most prominent Monuments in the capital, its unique and innovative image attracting crowds of pedestrians on the road.

It was founded by Edward Louis Joseph Empain between 1907 and 1911. He was a Belgian businessman who was awarded the title "Baron" by the King of Belgium, on account of his economic contributions. The French architect Alexander Marcel was tasked with building this masterpiece.

The interior design of the palace consists of three floors topped by a roof. The palace is surrounded by a large garden from all sides. As for the basement, it contained a residence for the palace's servants, and consisted of a group of rooms connected by corridors and doors. The palace building is surrounded by a spiral staircase and an elevator that connects all the palace floors with a basement.
The ground floor consists of a reception room, a dining room, and a billiard room. As for the first floor, it houses four rooms, each with its own balcony and bathroom.  Finally, the roof of the palace comes as an open space on one of the sides of the tower, characteristic of the Baron Palace.