The Rashidun Caliphate is so called after the first four leaders of the Islamic World, called caliphs—which literally means “successors”—following the death of the Prophet Muhammad. This was one of the most glorious of Islamic periods. Constant warfare between the Byzantine and Sassanian Empires had weakened them, and Muslim territories were expanded. Egypt was conquered (20 AH/641 AD) during the reign of Caliph ‘Umar ibn al-Khattab (13–23 AH/634–644 AD), taken over from the Byzantine Empire, which had itself only recently reconquered it from the Sassanian Persian Empire.

The general leading the army that conquered Egypt was ‘Amr ibn al-‘As, who desired to continue having Alexandria as its capital. Caliph ‘Umar ibn al-Khattab refused, arguing for a capital that was closer to the the seat of the Caliphate, Medina. ‘Amr ibn al-‘As was appointed the governor of Egypt, and a new capital was founded: al-Fustat. Although the city by the name of Cairo would not be founded for another three hundred years, Egypt’s modern capital has its roots here. 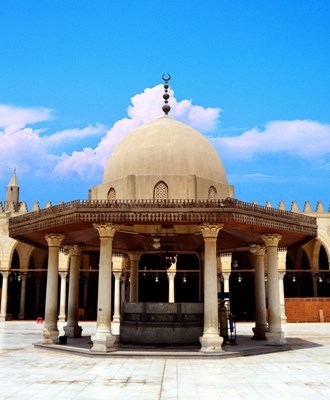