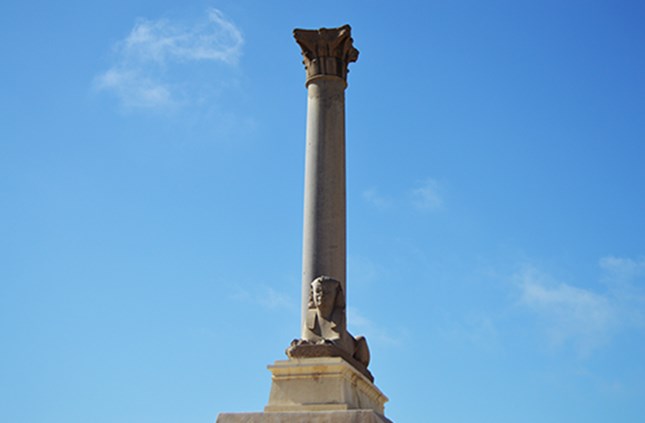 Alexander the Great founded Alexandria in 331 BC on the Mediterranean coast in northern Egypt, tucked in the western Delta. An ancient Egyptian town or city by the name of Raqote appears to have already existed here.

After Alexander’s death in Babylon, in 323 BC, his generals fought amongst themselves for control over various territories of the empire. Ptolemy I Soter (306/5–283/2 BC) took control of Egypt, initiating the Ptolemaic Period. which would end with the famous Cleopatra VII. Alexandria became the seat of Ptolemaic rule, and remained the largest and most important city in the eastern Mediterranean until Constantinople’s rise to prominence starting the 5th century AD.

One of the major monuments that may be seen in Alexandria today is the towering and massive Diocletian’s Column (late 290s AD), which is more famously—but incorrectly—known as Pompey’s Pillar. It stands immediately next to the remains of the Serapeum, the principal temple of Serapis, the national god of ancient Egypt during this period. It was unfortunately destroyed when the Byzantine Emperor Theodosius outlawed paganism in 391 AD. Many others famed Alexandrian  monuments have unfortunately not survived either, such as the Great Lighthouse, and the Library of Alexandria. The majority of Alexandria’s surviving monuments are its necropoleis (cemeteries). The most well-known  of these is the Roman-era Kom al-Shoqafa, near the Serapeum. It comprises Greek-style catacombs and triclinia burials, a chapel, and a banqueting area that was used during funerals. Paintings and reliefs gracefully combine ancient Egyptian and Greek beliefs and artistic traditions.

The most impressive surviving non-funerary site is Kom al-Dikka. The monuments that can be seen here — which date to the late Roman to Byzantine Periods— include a theater building (odeion), a large bath complex, lecture rooms (auditoria), elite houses featuring gorgeous mosaics, and workshop spaces     .

The ancient city has suffered greatly throughout its history. It endured several major earthquakes in Late Antiquity and the Middle Ages. However, the glory of this city and its many monuments have survived in the memory and writings of Graeco-Roman travellers. More recently, underwater archaeology has begun to reveal the structures and colossal statues associated with the Ptolemaic harbor and coastal royal headquarters.