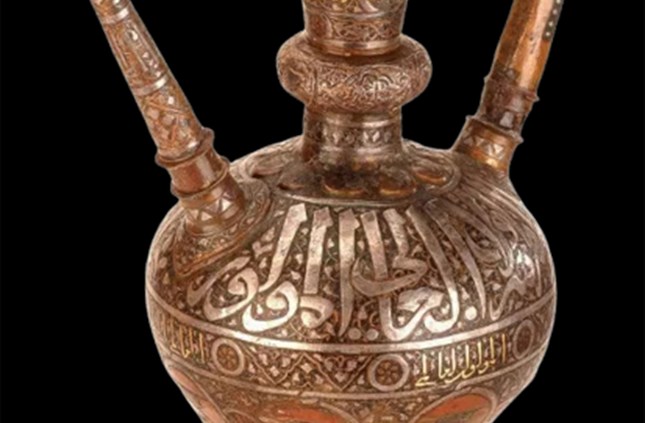 A jug made of copper inlayed with silver with decorations and inscriptions in the Naskh script, represented in the titles of the owner of the jug, including “what he did in the order of the headquarters of the honorable high Mawlawi al-Adli al-Ghazi al-Mujahideen al-Murabati al-Makhdudumi al-Saifi Tabaq al-Malik al-Ashrafy.” He is one of the princes of King al-Ashraf Khalil bin Qalawun. It appears on the jug (logos). It bears the drawing of a cup denoting the job of the water- supplier or the drinker - the one responsible for the Sultan’s drinkies . Tabtaq became governor of the city of Qus in Upper Egypt, and the jug has a neck adorned with three ribbons, the middle of which bears Du’aa writing, and it was also provided with a lid with two hinges and a strainer placed inside it. It’s found in excavations of Qus in Upper Egypt.