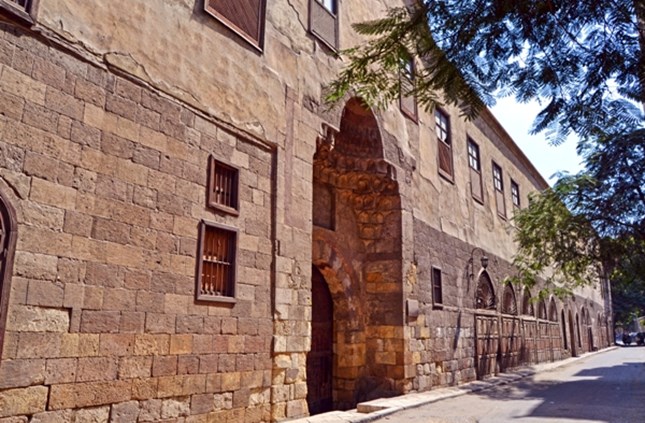 Counted among the most important and longest streets in Islamic Egypt, al‑Suyufiya begins at the intersection of Muhammad Ali Street and ends at its intersection with al‑Saliba Street. Al‑Suyufiya reflects the historical developments of the surrounding area. In the beginning of its history, it was part of the city of al-Qatai‘, and it witnessed the architectural development that took place during the Fatimid Caliphate (297–567 AH / 969–1171 AD). During the Ayyubids (564–650 AH / 1171–1250 AD), al‑Suyufiya was surrounded by groves, and partially overlooked Birkat al‑Fil (“Elephant Pond”). The construction of Salah al‑Din’s Citadel in 572 AH/1176 AD catalyzed urban expansion onto the street, and subsequently, in the Mamluk Period (648–922 AH / 1250–1517 AD), the street became the home of the Mamluk nobility and ruling class. This continued during the Ottoman Period (1517–1805 AD) and Muhammad Ali Dynasty (1805–1953 AD). Al‑Suyufiya Street includes a group of different Islamic monuments, such as palaces, mosques, takiyyas, domes, and shrines, all of which date back to different time periods. The most famous of those is the Palace of Prince Taz and the Mawlawi Takeyya.