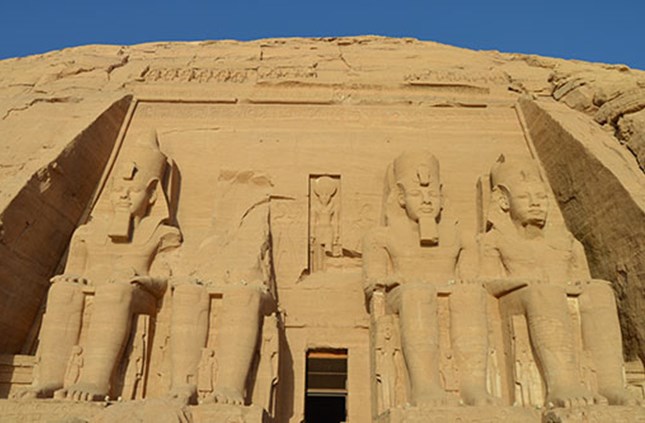 The Great Temple of Abu Simbel, in Nubia near Egypt’s southern border, is among the most awe-inspiring monuments of Egypt. It was cut into the living rock by King Ramesses II (the Great) of the Nineteenth Dynasty, around 1264 BC. The temple is most well known for the four imposing seated colossal statues that dominate its façade. One of these collapsed because of an ancient earthquake, and its fragments can still be seen on the ground.

Colossal standing statues of the king line the main hall, leading to the sanctuary where four deities are sat: Amun Ra, Ra Horakhty, Ptah, and a deified version of Ramesses II. The temple was built with such precision that on two days a year, the 22nd of February and 22nd of October, the sun’s rays enter the temple, cross the main hall, and illuminate the innermost statues.

Another rock-cut temple to the north, known as the Small Temple, is dedicated to the goddess Hathor and Ramesses II’s Great Royal Wife, Queen Nefertari. On the façade of the Small Temple, her colossi are the same size as those of her husband, a very rare example of such display.

The two temples were moved from their original location in 1968 after the Aswan High Dam was built, as it threatened to submerge them. The relocation was completed thanks to an international effort led by UNESCO, and the temple was admitted into its list of World Heritage Sites in 1979.