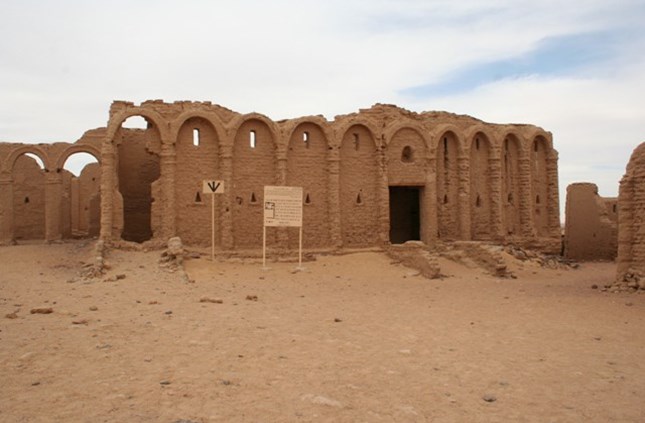 Bagawat, near Kharga Oasis, is one of the oldest Christian cemeteries in the country. The 263 known mud-brick funerary chapels       range from simple one-chamber structures to elaborate family mausoleums. Built over an ancient Egyptian cemetery, the style of the chapels fuses both ancient Egyptian and Christian elements. The cemetery began during the 3rd century AD

Early Christian burials continued the now-iconic ancient Egyptian tradition of using coffins and burying the deceased with burial goods. The burials were placed on shelves in pits dug under the chapels. Mummification was practiced in this cemetery long after it had died out in the Nile valley.

The Chapel of the Exodus is one of the earliest in the cemetery. The interior of its dome is decorated in bands illustrating scenes from the Old Testament. Perhaps the most striking of these shows the Exodus—hence the chapel’s name—with Moses leading the Israelites through the Sinai desert, as Pharaoh’s army gives chase. Other scenes depict Adam and Eve, Noah’s Ark, Daniel in the lion’s den, Jonah and the whale, as well as several other episodes from the Old Testament.

Similar themes are depicted on the dome of the Chapel of Peace, including the Annunciation of the Virgin Mary and other figures. Greek captions identify the scene that is depicted. The interior walls are also painted with many Byzantine frescoes of grape vines, peacocks, allegorical figures, and inscriptions.